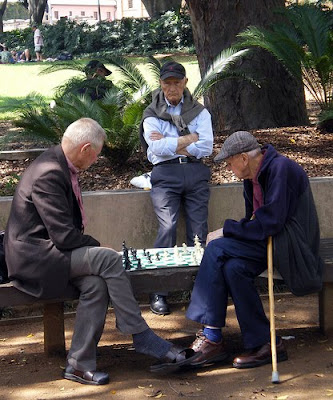 Alright, not quite. I played him to a draw this past weekend - the best result I've ever achieved against him.

He's Polish/Ukrainian so he's played quite a bit in his life and he's also highly proficient in the math/engineering department. In the tragic but likely scenario that my private investigator shatters my dreams, and informs me that I was in fact *not adopted*....it'll have to be inferred that I received all of my brains from the parents of my parents - with my grandfather chief among them.

Grandpa isn't doing well. He lost his wife last May and has been battling skin cancer and sundry other maladies for quite some time. His eyesight and hearing are shot; his toes are mis-aligned, with one languishing under the others; he often suffers sharp pains in his hands and arms; and he's depressed and altogether tired of this world.

Yet he claims to play chess about the same as he ever did; and he claims to still see *four or five moves ahead*.

Since I was up a piece and a pawn on him for most of the game, I was really ticked off that I didn't land the elusive victory. The 'ancient coot' is a wily one for sure. I played him so well that he's convinced I've been *practicing* hard. (I most certainly have not!)

The next morning I stopped by his house and told him that I stayed up all-night strategizing for our next match. He didn't even laugh at my comic braggadocio:

Our Easter Sunday rematch was intense. I had him on the ropes, my hands wrapped firmly around his neck...

I had his rook pinned in front of his king, AND I had a pawn one square from being crowned a devastating *second queen* for at least 20 moves but his hamstrung forces somehow kept me at bay - and he eventually checkmated me out of his ass the blue. After both games he apologized profusely for the results. Still unsatisfied, Grandpa wanted another game but my head was throbbing and my spirit crushed, again.

There's a darn good chance that if I actually do *practice* a bit (I'm about to teach my son the wonderful game), AND if my grandfather does hold on to see a 99th or 100th birthday....that I may in fact be able to beat the grandmaster, once.

And as much as I'd like to checkmate his cocky a$$ after all these years, I think I'd so much rather remember him as the *invincible giant*.

(This post's title is certainly obscure, but I believe technically appropriate.)
Posted by CaptiousNut at 11:20 PM