My Analysis = Money In The Bank 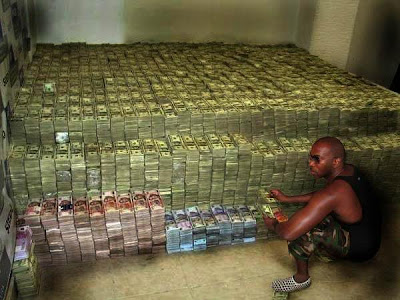 Bond markets have rallied in the past year. Most of these Big Bank earnings from the likes of JPM, BAC, WFC, are from simply marking up the paper value of their fixed income - much of which is still very toxic. They aren't dumping any of these securities, so the risks of these long-term instruments have not been eliminated or even mitigated. Note the banks deceptively refer to these unrealized, and unsustainable gains as *trading profits*...

And financial blogger Reggie Middleton confirmed that. He writes:

Other income was higher owing to fair value option impact on Merrill Lynch structured notes (the highly suspect, level 3 asset, non-market price based opinion of management) which resulted in 1Q10 gain of $226 million against loss of $1.6 billion in 4Q09 as well as minimal write downs on legacy assets (again, the highly suspect, formula driven opinion of management) against write-down of $1.0 billion in 4Q09. Although it shouldn’t be necessary, I will still state that gains in these areas during an era of highly suspect asset values should be viewed with a very jaded eye.

To make a point. Realize that I didn't read Reggie's - or anyone else's - analysis before offering my own. Without even going near a news story or a balance sheet I KNOW what the banks are doing. They are playing games with the *mark-to-model* license granted them by Big Government incumbents. Again, Bank of America is not selling those Merrill Lynch *assets*; they are just marking them up. They aren't selling them for the same reason those overpriced McMansions are just sitting there on the market - because the sellers don't want to hit the *reality* bid.

I was at dinner a couple of weeks ago with some highly compensated *analyst*. He was singing the praises of the big banks, particularly Bank of America. I scoffed and told him it'd be trading at $5 a share yet again. He scoffed back; told me that it most certainly would not; that banks were *what he covered*.

What he *covered*? Was I supposed to bow in deference?

CaptiousNut - How leveraged are the banks? What happens to the value of their collateral with 7% mortgage rates?

The self-proclaimed expert had no answer to that. And we made a gentlemanly bet about the future path of the stock.

Look, just because the Federal government is bailing out the banks, that doesn't mean common shares of their stock will maintain value - no less appreciate. Consider Fannie Mae and Freddie Mac. The Feds have made their bondholders 100% whole and still their stocks essentially went to zero.

Obviously, the Feds have demonstrated that plutocrats people with money in the bank....their money is safe in the sense that Big Government will simply print (more) currency and hand it over to the banks should they suffer a *run* or become functionally insolvent.

So rest assured, your nominal wealth is safe. Just don't ask about its *purchasing power*.

Later in the evening, I hit the expert one more time:

CaptiousNut - Look, you can focus all you want BAC bouncing from last March....but the fact remains, the stock is at a 14 year low, has no dividend, and has enough unrecognized losses for the next decade.
Posted by CaptiousNut at 4:29 AM