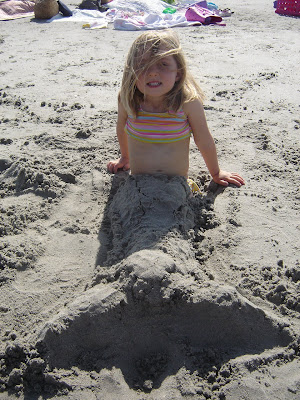 It was 89 degrees here today in Boston, a record high for April 7th I believe.

My father drove in last night. So I got up early and went to the driving range at 7am this morning. But I saw the parking lot empty and decided to play a round. *Cart path only* slowed me down - it took me a full hour and 45 minutes to finish.

I was home before 10am and that was with a stop at the grocery store. I proceeded to help my kids with the *work* I left out for them this morning; then I barbecued a nice lunch for my father and my kids which we enjoyed out on deck.

Right after that, I started packing up the car for the beach. No sunscreen was to be found so I stopped at the local convenience store and paid an obscene ten bucks for their last tiny bottle.

We spent four glorious hours there today, sipping beers and chatting with the local *moms*. The kids were great - entertaining themselves and playing with randoms and a few of their friends who happened to be there. I don't think I lifted my hiney out of the chair for more than 30 minutes total the whole time.

At first, around 1pm, the beach was well populated. But it was mostly 'old coots' with their mangy mutts and new parents with their 2 and 3 year olds. Noticeably absent were the older kids. They were all stuck in *school*.

New England is certainly NOT like Southern California. There just aren't too many nice weather days in a calendar year. I believe last year I was at the town beach 3 out of 4 consecutive days in April, a couple of times in May, BUT not a once in that rainy month of June.

Much later on, around 4:30pm people started pouring in. *School* was out. I don't know. Even if I had kids enrolled in a school....I think I might have given them the day off it was so beautiful today. Hopefully, the teenagers were wise enough to skip.
Posted by CaptiousNut at 7:54 PM

Ha! Wise teenagers... now there's an oxymoron for you!

Youth is wasted on the young anyway, someone once said - hope you went somewhere nice like Deluxbury and not Nantrashket, C-nut.
-Rich

It sounds almost as dirty as that mud-pond known as *Hingham Bathing Beach*.