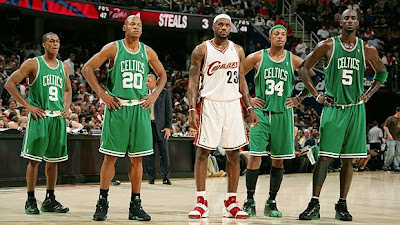 The Celtics this year started out like a house of fire afire.

But I believe they've only been playing .500 since Christmas. Quite simply they've been terrible - losing big leads often, losing home games, and losing to some of the worst in league history (e.g. NJ Nets).

While I shorted them, kind of, twice this year. I'm still responsible for my widely inaccurate pre-season prediction:

So there's my NBA prediction for the year - a healthy Celtics in four games over whomever.


Now there was a time when they suffered a spate of injuries....but even when they got 100% healthy, surprisingly the team didn't improve an iota. The Siamese twin realities of *age* and *slowness* hit the team all at once.

Lebron or whoever is going to trounce their 'old coot' butts in the playoffs.

And the next bleak decade for the Celts is as great excuse as any to rid myself of this *childish* passion once and for all.

Time To Short The Celtics

Obsessions Of Yore
Posted by CaptiousNut at 1:46 PM

"The Celtics this year started out like a house of fire."
Being a long time loyal reader of your blog I'm becoming alarmed by what seems to be a relatively high incidence of metaphorical errors.
(The correct metaphor is: ... like a house afire.)

Are you slipping or not paying your ghost writer(s) enough?
Or, perhaps I am becoming punctilious in my later years.

C'mon, C-Nut. Reassure me your neurons are functioning properly.

There's nothing wrong with my neurons...

I'd always thought the expression was *house of fire*. I believe I first heard my father utter it decades ago and not only was it unlike him to use *a-* words: astir, ablaze, astride, afire, etc., I've also never seen the expression in written form. Nor has anyone ever corrected me before.

Personally, I consider it an act of rudeness for someone to NOT CORRECT me when I'm wrong.

And I try my hardest to return the favor!

Conversational idioms don't make it into the written word that often - I guess.

Talk to 'Sheed. The cancer within is the most destructive.