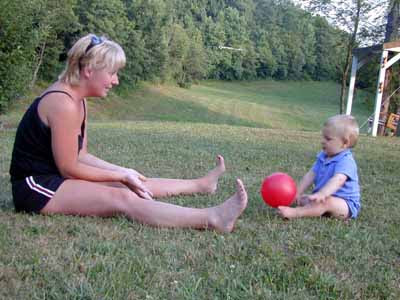 I went outside with my 5.41 year old son and for the first time had him play catch with me. Like most kids his age, he was a bit afraid of the ball and wouldn't watch it into his hands; his head ended up catching more than a few. We continued until he had caught the oversized wiffle ball 50 times. Then I had him hit a few balls off the baseball tee before we headed over to the (lowered) basketball hoop with a smallish ball. He had to make five baskets before we called it quits.

This *sports work* as we called it will be on his *list* now every morning.

A lot of his age-mates are well ahead of him in terms of athletic exposure. I know several that can throw, catch, hit, skate, play on soccer and T-ball teams, etc. and have been for a while now. Those lucky few who've known me for the long haul might be surprised to learn that I, despite my sport-obsessed youth, am deliberately stunting my son's athletic endeavors.

Why is that? Well personally I feel like I wasted too much of my own time and energy on basketball, soccer, and then golf. I grew up in Central Massachusetts, an economically and spiritually depressed region. Sports is the balm, escapism for the lumpen masses. Even worse, it is more accurately *spectator sports* and *organized sports* that reign supreme.

I believe I myself started baseball when I was 7, quit that for soccer when I was 8, and started playing basketball shortly thereafter (golf began at 15). Even with that retarded start I still managed to over-do sports.

So there's no hurry at all to sign my five year old up for organized team sports - even though the planners are now targeting that age level these days. We'll keep it simple, keep it non-competitive, keep it fun, and keep it mostly *disorganized*.

Plus, I have an undeveloped theory that by turning ball-playing into a *managed affair* that it has to take something away from the pleasure of sports. Just as organized education ruins kids for books and life-long learning, I think having parents, referees, team uniforms, and scheduling most likely diminishes the joy that previous generations had playing sandlot stickball, pick-up basketball games, and that Third Worlders got from kicking ersatz soccer balls around.