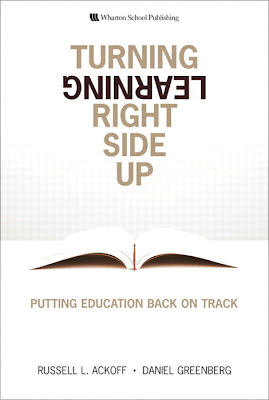 This book started out so promising....and then went nowhere!

Though here are a few decent excerpts:

Consider this one example from my recent experience. I attended a conference of school counselors, where the latest ideas in the realm of student counseling were being presented. I went to a session on the development of self-discipline and responsibility, wondering what these concepts mean to people embedded in traditional schooling. To me, self-discipline means the ability to pursue one's goals without outside coercion; responsibility means taking appropriate action on one's own initiative, without being goaded by others. To the people presenting the session, both concepts had to do solely with the child's ability to do his or her assigned classwork. They explained that a guidance counselor's proper function was to get students to understand that responsible behavior meant doing their homework in a timely and effective manner, as prescribed, and self-discipline meant the determination to get that homework done. George Orwell was winking in the back of the room.

Schools are not only obsessed with the "one right answer" but also the right questions. The American anthropologist Jules Henry made the point when he asked what would happen "if all through school the young were provoked to question the Ten Commandments, the sanctity of revealed religion, the foundations of patriotism, the profit motive, the two-party system, monogamy, the laws of incest, and so on."

Ronald D. Laing, the eminent British psychiatrist, replied that there would be more creativity than society could currently handle, but not more than it should be capable of handling. Keeping curiosity bottled up, as noted previously, is a "major preoccupation of institutions set up to manage the viable functioning of society." Thus, schools perform a societal function in suppressing an uncontrolled development of creativity. But if society is to be all it can be, even approximately, these institutions must liberate curiosity and not confine it autocratically.

When schools were thought of as factories, there were designed to facilitate teaching, not learning. In general, architects and educators have yet to try to design educational environments intended to facilitate learning rather than teaching. Those few schools (such as Sudbury Valley School in Framingham, Massachusetts) that are built around learning have had adapt buildings built for other purposes. But, the ways in which they differ from conventional schools provide clues as to what institutions designed for learning would look like. Keep in mind that most learning is done at home, at work, or outdoors.

Another aspect of current school design is a major deficiency: Schools are in use a very small proportion of the time because they are designed for only one function. For most of a day's 24 hours, they are unoccupied. For many weeks of the year, they are not in use. This suggests that there are other related uses to which school buildings could be put if they were designed for multiple functions, the presence of which could augment the educational process. Schools should act as community centers, as locations for adult education, and as centers for provision of government services. Schools might well be combined with public libraries and buildings that house public services such as local government and police. Students could learn a great deal through exposure to the activities in such buildings. It would also do a great deal to integrate learning into other normal activities.

Finally, it should be noted that schools - especially colleges and universities - have faculty offices that are designed and arranged like cells in a monastery. They reveal eloquently the hypocrisy of claims of educators that they seek interdisciplinarity in education. Separation of faculty members in the same discipline by spaces that are not directly connected to each other, and faculty members of different disciplines in different buildings or different floors of buildings, furthers the isolation and inaccessibility of faculty.

It is not so much that synthetic thinking is absent from the school curriculum as that analytic thinking dominates it.

There were two main reasons I ordered this book:

1) I mistakenly thought it would discuss specifically how education has morphed in the internet age.

2) I thought I would gain additional insight into that *unschooling* school - Sudbury Valley which was founded by Greenberg.

The first third of the book was terrific and about all I can recommend. Go read it in the aisle at Barnes & Noble. I'd even go so far as to submit that the remainder of it was borderline drivel and stunk!

Since I learned nothing new about Sudbury Valley, I had to order yet another book from Greenberg - The Pursuit of Happiness - The Lives of Sudbuy Valley Alumni.

My hunch is that although there's substantial merit to the Sud Val's *radical unschooling* design, that there's just something awry about it all: about giving 4 year olds a vote on who's hired, about allowing kids to play video games all day if they wish, etc. Consider that in this entire *education* book written by Greenberg and Ackoff, they didn't mention "family" once!

But still, I'm staying open-minded and won't render a final verdict on this approach until I get my hands on sufficient evidence. I am planning to go pay the $150 and visit the school with my son for a week (only 30 miles from my house); and I really want to meet the older kids there; I want to assess the finished products for myself as I've read quite enough *theory*.

So what did Ackoff and Greenberg come up with at the end of this book?

Is that ridiculous or what? Issuing vouchers has to be one of the most ill-conceived *solutions* out there. For crying out loud we already have a de facto *voucher system* for colleges and universities, do we not? Yet still, education on that level remains nothing but a grotesquely expensive joke - and a tragic waste of time.

The authors stipulate on page 155:

What can be done with the vouchers? Parents can use these vouchers to pay for a child's admission to any school of their choice that admits them (see ahead). In particular, any group of parents can join forces and use these vouchers to create a school for their children, as long as the school is not affiliated with a religious organization or does not provide religious instruction.

Are these guys part-time Morons or what?

Who's to arbitrate precisely what *religious instruction* is anyway?

I'd argue that an eco-pagan *nature* school falls into this category.

Still, others would submit that taking immature, dependent children away from their families and permitting them to do what they want, when they want as they do at Sud Val....that such a school was also a religious, pagan endeavor - one where everyone worshipped the false idol of themselves!

Obviously, education needs to be de-federalized; then the states have to push it back to individual towns; only that will open up the well of innovation and drive down costs.

What a shame this book turned into after a most auspicious start. Whoever the *editor* was, he's a total Moron for not realizing how badly it veered off course in terms of coherence and content.

My premature recommendation can be found here.
Posted by CaptiousNut at 3:39 PM

"Parents are a nuisance for most schools. They complaint, criticize, take up time, and worst of all, they interfere in their children's education.

At Sudbury Valley, parents have been an integral part of the picture from the beginning. We felt that, to succeed, we had to have the full cooperation of the student's families. To begin with, education is the primary responsibility of parents. They bring children into the world, and it is their sacred duty to rear them to the point of independence. Schools exist to help parents in this task, not to exclude them from it. At least that's the way it is supposed to be in this country, where individual freedom is protected.

Then again, children are truly whole persons only if their family and upbringing is in harmony with their inner being. Inter-generational conflict may be widespread, but so are cancer and heart disease; no one recommends these things as desirable…"

As for vouchers, when the State assumes financial control of education, it is logically appropriate that the State should progressively assume control of the content of education -- since the State has the responsibility of judging whether or not its funds are being used “satisfactorily.” But when the government enters the sphere of ideas, when it presumes to prescribe in issues concerning intellectual content, that is the death of a free society.

Apropos, did you visit the school?
.

Unfortunately, I did not get a chance to visit the school before moving back to New York this past spring.

I would very much like to have done so.