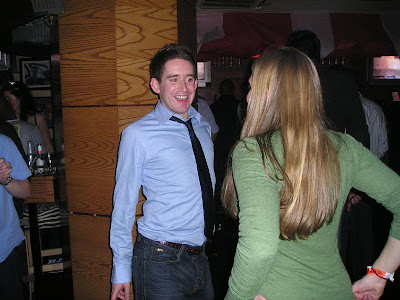 So last Thursday I went to one of the five (?) local bars. The Patriots were playing the Jets; it was almost a full house.

I'm sitting in the middle with three other dudes and I notice behind me, in a booth, was a *mom* I recognized from my son's *pre-school*. She's there, all dolled up (why?), with a gentleman I assume is her husband. That's how everyone rolls out here - married.

Maybe an hour later she walks by to go to the can, on her way back I said hello. Of course she knew who I was - though we'd never so much as swapped names.

So now we're talking about the *teachers* and other nonsense, meanwhile her husband is right behind us. She didn't introduce him or pay him any mind. After a few minutes it's apparent that she's *over-served* as she kept gabbing and putting her hand on my shoulder. Something here was off. What should have been a 90 second hello was pushing 10 minutes. I'm giving her short answers and glancing toward the football game - any little hint I can think of to remind her that I was out with my buddies, and she with her husband.

It was slightly weird, but nothing extraordinary for a bar, on Earth.

Much later in the night, I myself have to use the *comfort station*. The seal was getting broken.

He engages the urinal beside me and eerily starts flopping around his manhood.

He responded in the affirmative and started giving me all sorts of unnecessary attitude.

Whatever bro....I certainly don't need to take crap from some random insecure dude.

So this couple decided to move from the nearby booth to the end of the bar. Another 45 minutes or so passes. It was getting late, the Patriots had lost, and the band started playing. Next thing I know, the *mom* has left her hubby and gone down to sit at the other end of the bar, all by herself, 7 feet from moi.

Now she's down here for a long time. Obviously they were having one of those *drunken couple arguments* - with an innocent CaptiousNut somehow interjected into the middle of it.

That's just great. This was so not my end-game for a Thursday night at the bar. I had to see the guy's member for crying out loud.

A few songs later, the husband approached his wife and they seemed to have somewhat of a reconciliation.

You know what probably happened?

This hammerhead husband had, more than likely, just seen that movie!
Posted by CaptiousNut at 8:41 PM

It happens. If the hubby is nearby, I always introduce myself if toots doesn't just to avoid taking sides. And a little friendly man banter with him will usually clear her out, which is the goal.

Yeah, you're such a stud you cause martial squabbles. Get over yourself.

You'd deprive me of it?