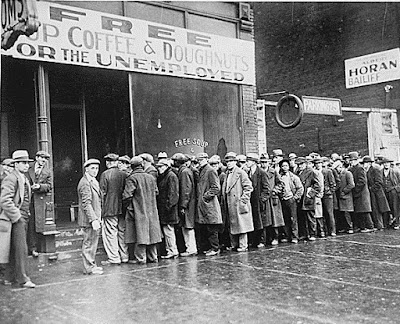 Given this economy, I figure why not put up a pic of lazy freeloaders from the Depression!

Mrs. C-Nut wanted to do a *soup kitchen* in Manhattan for Thanksgiving this year. She thought it was a fantastic idea for the whole extended family to volunteer and serve the needy uninstitutionalized, mentally ill. In particular, she thought it'd be a great experience for our spoiled nieces and nephews.

But the euphoria evaporated when I informed her that, "We'd have to eat dinner there, too."

No way. She thought that after working a shift at the soup kitchen that we could go out to a nice Manhattan restaurant.

I got a great big laugh out of this. Turns out these kitchens won't allow small children in there so the idea was *out*. But really, I think it was my caveat that ruined the grand idea.

I don't do extra charity. I figure surrendering near half of my annual income is more than sufficient. I've probably got to self-improve in this department.

You know, before the State went into the charity/welfare biz private individuals and religious groups kept people off the street, fed them, and put them to work. If Big Government were to *step back*, others would step up - as they have for centuries.

We're still going to Manhattan for Thanksgiving; we might even take the kids to the Macy's parade.

And yes, we're going to a nice restaurant - though I'd rather do Dim Sum in Chinatown.
Posted by CaptiousNut at 10:06 AM