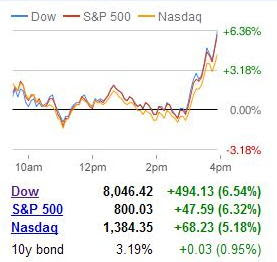 For a day anyway.

I am essentially long oil and oil stocks which got hammered. I am also short long term Treasuries through TBT. Both of those positions killed me.

Against that I have my massive short position in Wells Fargo. With Citigroup dropping like a stone, Bank of America threatening single digits, and JP Morgan falling off a cliff, Wells Fargo dropped a mere 1.87 yesterday. If it traded in line with the other banks, down 3-4 points, I'd have fared okay.

Instead, I lost a good chunk of money Wednesday and Thursday.

Luckily, today I made it back. 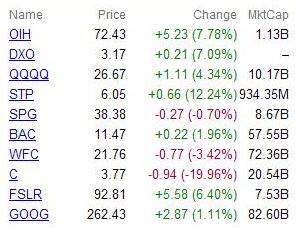 Here's what I've been doing since Tuesday:

With the market tanking, I went *bargain* hunting.

I added to TBT, my long term Treasury short ETF. Was a horrible purchase. Bought at 57.74. This thing dropped below 50 the next day! Remember, this is a long term disinvestment. Who's going to keep buying 30 year Treasuries yielding 3.7% going forward? Can't wait to see the international reaction to our *Federal tax receipts* come the new year.

Now as for Wells Fargo....did I pick the wrong bank to short or what?

It was down 4.5 points the past two days. Meanwhile, JPM dropped 9 points between Wed and Thur, AND was down another 3.5 points today.

Furthermore, Bank of America fell 25% over Wed and Thur. AND Citigroup positively imploded falling from 8.66 on Tuesday afternoon to close at 3.77 today - a loss of 57%!!!

It's a real test of fortitude not to buy a *chunk* more and try to scalp it. So far I have resisted.

Make no mistake...this is scary. If depositors start lining up to take their money out of Citi who knows what that will do to our fiat ponzi scheme. This keeps me up at night - AND I don't even own anything; no home; no mutual funds. Ignorance is bliss! 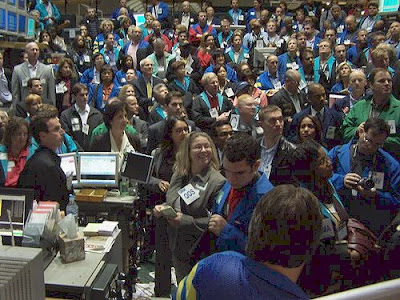 Another from the *alpha seeking* file was STP - Suntech Power Holdings - a Chinese Solar Company (who cares what it is really?). I bought some at 5.80 on Thursday. I was actually reading an *old* Forbes magazine and I read Jim Oberweis' recommendation to buy it. In the October 27th issue, he said to buy it AT $35 PER SHARE!!!!

In his defense, he wrote the column on October 2nd. So that 83% he lost his readers actually occurred over 1.5 months. So he's vindicated, right?

Oh yeah. In that same issue Ken Fisher said to buy Bank of America at $34. What a total bleepin' idiot!!! BAC flirted with single digits today (down to 10.01) before closing at 11.47. The sheeple have given this man, what, something like $46 billion to *manage*?

Also, Ken Fisher said to buy Citigroup at $25 in March. Listening to this guy would have absolutely killed you!!!

I covered my tiny BAC short at 13.84 the other day. It was tiny because it was hard to implement with all the *rule changing* (i.e. short banning) in September. I was short from 30.50.

I added to my erstwhile, flailing oil long, DXO. My average price is now 4.18. Funny Circus Bears was absolutely right when he claimed, 11 days ago, that I was a "little early".

However, I left myself plenty of room to average down. Still have more bullets if needed.

As for being early....I was early on SKF too. Early getting in, and waaaay too early getting out. That thing traded above $300 today. Of all the bunker-digging, end-of-the-worlders that I read, NO ONE, I mean NO ONE had a $300 target on the SKF. $200 or $250 are the high numbers I recall.

And I covered my short stock position in WFC at $21.75. My cost bases I'd have to dig up - though the profits on this were far from spectacular. If memory serves me, I started putting some of this short on at 23.95 back in July and then some more around $27.00. Recall this stock spiked to the insane level of $44 in September. Of all my trading losses over the years, that *paper loss* was the most brutal. So it was a victory just get the money back.

This stock is definitely heading lower. I just needed to lighten up on it given my presumption that the overall market is due for a bounce. Of course I could buy the *market* against it - as I've been leaning that way on a short term basis, BUT I'd rather just clean up my account. I still own Jan 30 and April 30 puts on Wells.

The stuff I have now - oil and short Treasuries - are *investments* as much as they are trades. I'm comfortable holding them 6 months to a year.

Last year I set a buy price of 250 for goog but I still could not get myself to pull the trigger on it. You will most likely do well and I may have missed an opportunity.

I am not as pessimistic about WFC as you and have been waiting for a sub $20 long entry but didn't buy yesterday.

Obama's massive jobs plan announced this morning and some sort of resolution on C could have quite a dramatic effect on the market Monday.