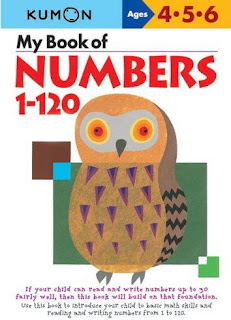 My son will be four later this month. I guess according to the *ages* on Kumon's workbooks he's about a year or so ahead already which is far behind my goal of *4 years ahead*.

He just finished this book - writing the numbers 1 - 120 last night by himself. Next up is "Simple Addition" which looks pretty darn easy.

The major problem with this type of education at such an early age, IMO, is the mechanics of writing. My son's hand gets tired quickly. He also holds the pencil a little too tightly. Again, I am not even sure that writing is a needed life skill. I can't even read my own notes for crying out loud.

Progress has really been accelerating now that he's writing better.

How much time do I spend with my son on this stuff?

Not enough - maybe 15 minutes per day tops. My wife does the reading with him at night. My idealistic goal would be one solid hour everyday but I'm not even close. This I have to work on. His little twice-a-week pre-school classes really take a bite out of our free time.

Even though they're only 2.5 hours long, they take up more like 4 hours when getting two kids dressed, dropping off, and picking up are considered. I am tempted to pull him out of this completely anyway. More on the pre-school later. This time-loss or inefficiency is a major argument against the effectiveness of mass schooling. Kids waste precious hours getting tarted dressed up and traveling to and from school each day. It's time they could be learning.

There are a few other things I make a point of doing with my son. For one, I make him read every sign we see - roadside, in a store, wherever. We also have a dry erase board that we use to list the day's activities. If my two year-old daughter doesn't erase it, it also serves as a nice little report card for Mom when she gets home.

I've also been encouraging my son to *teach his sister* - everything. Right now, I am trying to get him to teach her to count. She can almost make it to ten.

I'm only homeschooling one child. After that, like everyone else, I am outsourcing!
Posted by CaptiousNut at 2:53 PM

Or you could take it the other way and school three at a time for a fee. Just a suggestion.

I've thought about starting a school. I really have.

The real estate aspect/investment of it will kill you though.

Would have to go to some super-wealthy area and do in-home tutoring or teaching. Or you'd have to mooch off someone else's existing facilities (e.g. a church or a library).