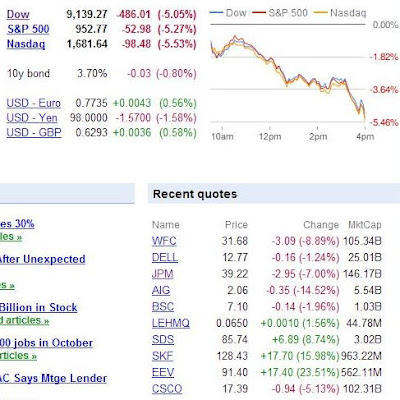 My three short trades from yesterday paid off handsomely, today.

I bought some SKF at 118.21, as you can see from the graphic above it closed at 128.43 today, after *spread the wealth around* Obama was elected President.

I bought EEV yesterday at 80.60 intraday AND doubled it up after the close at the cheaper price of 74.75. I let out half of it this morning at 82.58. This UltraShort Emerging Market ETF closed even higher at today at 91.40. Cha-Ching!

I joked on the Rich Karlgaard's blog that the Dow Jones Industrial Average rose 300 points yesterday in celebration of John McCain's impending loss.

And it dumped 486 points today because Barack Hussein Obama won!
Posted by CaptiousNut at 8:59 PM

Trade below 7,400 before then or does it have to close under on that date?

If it makes a one second bounce between now and then below 7400, I get a fiver. Yay! Me. Five bucks will buy one whole beer at the bar.

I don't bet on stocks!

It is not my living-making thing, so it's cool. If I counted on making money at it, I am certain my attitude would be quite different.