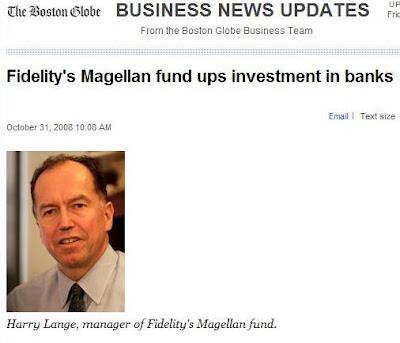 Boy is THAT a misleading headline.

Fidelity Investments' flagship Magellan fund sharply raised its holdings of Bank of America Corp and JPMorgan Chase & Co in September, as it moved into bigger U.S. banks amid the worsening credit crisis.

The $28.3 billion fund, managed by Harry Lange, also sold out of positions in Merrill Lynch & Co, Morgan Stanley, and Wachovia Corp. in September, and slashed holdings of Goldman Sachs Group Inc., according to data posted on Fidelity's website on Thursday.

Magellan also slashed its holdings of insurer American International Group Inc. at the end of September from the prior month. AIG's shares sank in September as the U.S. government took it over to prevent its failure.

Lange raised his stake in Bank of America to $834 million from just $18,809 a month earlier, making the U.S. bank his sixth-biggest holding.

Bank of America, JPMorgan and Wells Fargo have fared better than some rivals in handling the credit crisis, and are making large acquisitions to consolidate their positions. 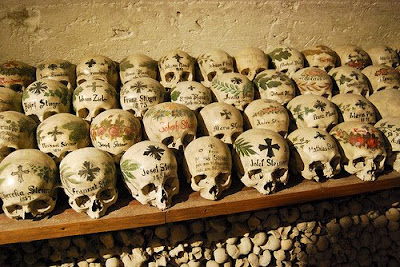 Now the boneheads in Boston reading this far right now don't have the slightest clue how misleading, or irrelevant that positive headline was. But anyone who knows where Goldman Sachs, AIG, Merrill Lynch, and Morgan Stanley were trading in September when Mr. Lange *slashed his holdings* knows that he and his investors took a bath, a blood bath.

He didn't *slash* his holdings - THE MARKET DID!!!

And now this genius is piling into the biggies: Bank of America, Wells Fargo, and JP Morgan Chase.

Think he's going to be right this time? I don't and I have my money where my boca is - short all three of them.

Here's the real story - even if whitewashed - from that article:

Magellan's performance has floundered, partly because of the financial sector bets. The fund is down 49.2 percent so far this year compared with a 35.5 percent negative return of the S&P 500 index, according to Lipper data.

More aptly, this Globe article should have been titled:

"Fidelity's Magellan Takes It In The Keister!"

Just as I told y'all last week in The Skim Biz Takes A Hit, rumors are already swirling about layoffs from asset managers.

I was at a Harry Lange speech back in June/July. He insisted that Oil was going above $200/barrel and also stated off handily that Oil companies were hiding their profits for political purposes. I got the sense he was implying support for a windfall profits tax. He made a couple veiled comments that leads me to believe he is a liberal. He does live in Mass. Interesting tidbit, he got his B.S. from General Motors Institute, 1975.
Kfell

Oil companies were hiding their profits???

Meanwhile he bought stock -and got annihilated - in financials that ACTUALLY were hiding their losses!!!

Shoot, I'll bet he took some hefty losses in oil stocks too, if that was his assumption back in June/July.

The supersized, diversified fund hasn't worked for quite some time now.

Fidelity is the most overrated financial services company in the world. Their next 5 years will mirror the overall economy. Down and out.