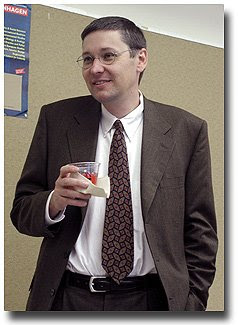 It’s an enormous blot on the reputation of the profession [re: their failure to predict the mortgage crisis]. There are thousands of economists. Most of them teach. And most of them teach a theoretical framework that has been shown to be fundamentally useless.

Like his late father, Galbraith the younger is highly critical of mainstream economics. This is noteworthy in part because Galbraith is listed as an Obama economic adviser.

One of the more telling things to look out for in the coming weeks (assuming the seemingly inevitable Obama victory) will be which economists get which jobs in the new administration. Will the important positions be filled with people like Austan Goolsbee and Jason Furman, who are essentially mainstream economists with slightly left of center political views, or with heterodox economists like Galbraith who are deeply skeptical of the economics found in most textbooks? If the administration is filled with prominent members of both groups, the internal battles over the heart and soul of the new administration's economic policy should prove fascinating to watch.

His nerdy hunger for FASCINATION just proves Galbraith's point about economists and their *fundamental uselessness*!!!

Yes they are useless, but far from innocuous.

Just think of how wannabe elitists he's helped teach the heinous crafts of confiscation and redistribution.

What about their negative externalities, Greg?

If ONLY they were just *useless*.
Posted by CaptiousNut at 1:06 PM

I became outraged at this after randomly opening my sister's high school econ textbook to "market failure" discussion (this was a book published with help from the WSJ). I tried to explain to my parents the absurdity of funding (through taxes and otherwise) a system that was educating people in such a way that they would necessarily be politically-inclined to call for higher taxes on my parents, and they didn't seem to understand why I was as angry as I was about this. They don't seem to understand that to change the world we must change the way people think, and that there is great harm in allowing children to learn this backwards crap as they do.

"But Taylor, you went to the same school as your sister and you came out alright."

Now the question is, when will these a-holes get their comeuppance in this massive financial explosion they've administered... before the good people or after?

Sure would be fascinating to watch Mankiw and his family turn to desperate measures to survive the downturn.

ps. Where do you think these academic roaches HOARD their money?

Was there a *government failure* section of her textbook?

Your parents, like most adults, aren't interested in expanding their brains. If they were, they'd ask, "What do you mean Taylor? Please explain this to me. Can you point me in the direction of some good research on the matter?....."

My family won't even read my blog because there are just too many unsettling ideas for them to confront.

Greg Mankiw is loaded. He's made millions on his textbook - perhaps 10s of millions. I am sure he's in bonds and stocks. He's touted index funds on his blog before.

So he's down 35% this year like almost everyone else.