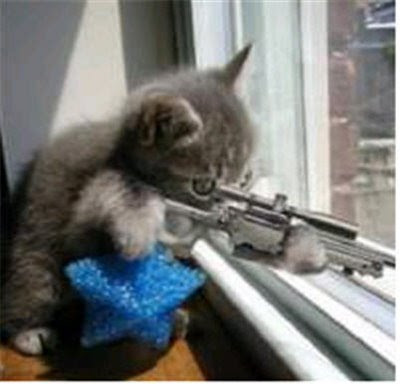 We came home at 1:30pm on Saturday to find a message on the answering machine. It was a recording from the police alerting us to a *manhunt* in our area. They said the suspect tried to break into an occupied home only 3 doors down from us. So yes, they gave the actual address and a description (grey sweatshirt, etc.) of the suspect.

The message said that the "resident scared him off". Anytime someone tries to break into an occupied home it's a little bit scary. You're thinking, "are they strung out on drugs?" or "a rapist?".

This guy is lucky that I wasn't home as I'd probably have *taken him out* long before the police arrive. The back of the targeted house is almost within my line of sight right now, sitting at my PC. Of course, if I had subdued the suspect in my backyard I'd have whipped out my camera and blogged it for y'all!

I just thought the reverse 9-1-1 was pretty darn cool. Why has it taken them so long to implement something so simple and so potentially fruitful?

What probably wasn't cool, however, was the fact that they nabbed the guy essentially in my backyard. They caught him two hours later hiding in the woods with my turkeys. According to the paper, the hood had a *long criminal history*.

I tried to find a good pic for *manhunt* on google but only found crap about inverted men and some violent (oft banned) video game. Enjoy the kitty instead.
Posted by CaptiousNut at 9:53 AM