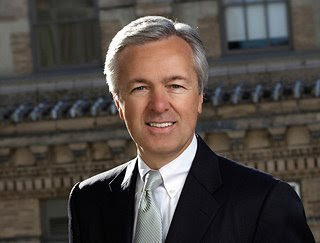 "We're not at the end," Stumpf said. "My suspicion is there is some more to go. But we're starting to see some early signs that maybe we've reached the bottom in housing or close to it."

This reminds me of Ken Lewis, who in June of this year (sneakily through his spokesman) said:

...the most likely scenario is one in which the economy does not deteriorate significantly...

He couldn't have been more wrong!

For that, see my old post Ken Lewis, Still Not Fired?

Getting back to WFC.

I am not shorting Wells Fargo directly these days. Instead, I am opting for the whole basket of Moronic banks via SKF. This way I get short exposure to Bank of America, Citigroup, JP Morgan AND Wells Fargo in one fell swoop.

The idea that we are at or near a bottom in housing is delusion of the highest order.

They are not foreclosing on deadbeats; the homes that do go to auction aren't selling; the few that sell are fetching 45 cents on the *note*; homebuilders continue to add supply to the market; Northeastern cities still haven't been seriously hit; and layoffs are just starting.

All of these banks are facing mounting losses IN EVERY LINE OF BUSINESS. Sure, Wells Fargo is wresting tax credits from the government....but don't they need *income* to offset in the first place?

All of these banks face further dividend cuts. They're all going to have to raise equity, again.
Posted by CaptiousNut at 10:18 AM

So do you buy the bank short on dips and then sell or just buy and hold?