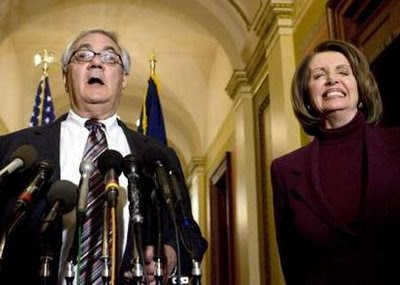 Barney Frank was just on 60 minutes. Here's a *money* excerpt below:

Leslie Stahl - We're now faced with taxpayers having to prop up companies that made bad decisions consistently.

Barney Frank - No, we're not propping up companies. That is your mistake! We're propping up individuals. The world doesn't consist of companies. The world are people. (sic) The country is people. And, uh, yes, it is possible to argue that the government can stay out...

Leslie Stahl - Then you're talking about welfare.

Barney Frank - Yaaaah. I'm for welfare. You're not? Are you for letting people starve?

You can read the entire interview here or watch it below:

My favorite part was this:

Stahl - So what are you saying about secretary Paulson?

Barney Frank - At first I thought he was focused too much on the financial community's tender feelings and NOW I think he's focusing almost exclusively on them.

Can one of y'all parse THAT logic for me?

Here's a *WARNING* map. In this gerrymandered district you'll find some of the dumbest people alive on planet Earth:

I've written quite a bit on this Moron. For a rough search click here.

Though my favorite post is still Dodging Barney Frank.
Posted by CaptiousNut at 8:21 PM

The funny thing about wishing that Barney Frank would choke on a c*ck and die is that... it might ACTUALLY happen one day!

One could only be so fortunate as to receive that news!