The Assault On Free Markets And Private Contracts 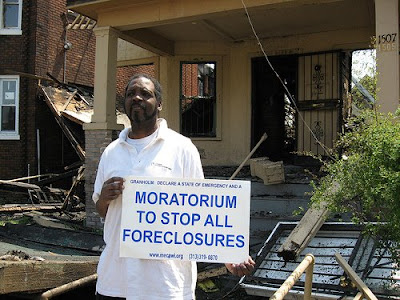 So-called 'loan work-outs' and mortgage modifications are NOT WORKING.

Dec. 8 (Bloomberg) -- Most U.S. mortgages modified in a voluntary effort to keep struggling borrowers in their homes and stem foreclosures fell back into delinquency within six months, the chief regulator of national banks said.

Almost 53 percent of borrowers whose loans were modified in the first quarter were more than 30 days overdue by the third quarter, John Dugan, head of the Treasury Department’s Office of the Comptroller of the Currency, said today at a housing conference in Washington.

But that's not going to stop politicians from calling more halts to *foreclosure*.

A snarky commenter (link above) asked:

Does the governor also propose a 3-6 month moratorium on delinquent property tax seizures?

Did you get that? If one doesn't pay their property taxes, the government will take their home. But the state apparently doesn't think banks (rightful owners) should be permitted to boot out delinquent squatters.

Note that Jon Corzine is a former Goldman Sachs CEO. He surely understands the hypocrisy, un-Constitutionality, and the negative economic ramifications (higher mortgage rates) of this proposed foreclosure moratorium.

Many other states have enacted similar foreclosure *timeouts* - and they simply aren't working in any manner whatsoever.

From that first link, here's our pal Barney Frank:

"The people who made the bad loans or bought the bad loans from others need to realize" that they would be better off with principal reductions than with foreclosure, the Massachusetts Democrat said.

Barney is right. If they simple cancel all debts, there'll be no more foreclosures.

The resultant INSOLVENT banks won't be too interested in taking back their homes.

This *bailout* has been and will continue to be a complete disaster.

AND, so far Congress has succeeded in blaming their own incompetence on bogeymen: greed, Wall Street, hedgefunds, and banks.

See also The Forgiveness Of Debts - It's Nothing New.
Posted by CaptiousNut at 10:49 AM