Should We Bailout Moral Superiority? 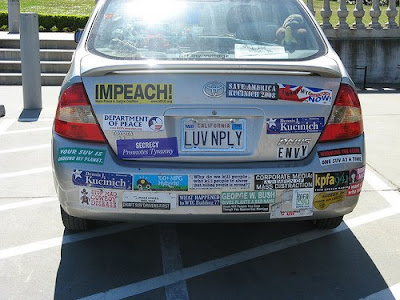 Right now, Chevy offers more models than Toyota or Honda with mileage of 30 mpg or better. This year, Consumer Reports rated Ford’s quality on par with Toyota and Honda. Last week, it was announced that Ford has more vehicles with five-star safety ratings than any other manufacturer. And while Moore paints a picture of the domestics as terminal losers, the vehicle with the biggest increase in sales last month was actually the Chevy Malibu (the vehicle with the biggest decrease in sales was the Toyota Prius.)


Prius sales are the biggest casualty in this market??? (link)

I love it! It just shows that eco-paganism is a trust-funded religion of the wealthy.

Oil gets cheap and in the course of an economic plunge, Daddy's funds run low....and they all hypocritically go back to the dirty combustion engine.

The difference between me and these Pluming Prius Putzs is that my coefficient of self-righteousness doesn't fluctuate no matter how much money I make or lose!

Their moral superiority may in fact be *too big to fail*. In which case Congress ought to act.

Gee, I wonder how that Pagan Pizza chain is doing?
Posted by CaptiousNut at 2:17 PM