A Pyramid Scheme Of Cards 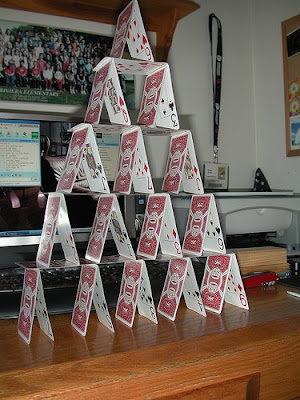 So, the latest science fictional narrative on how Big Government is going to extend Big Ponzi Scheme is this: 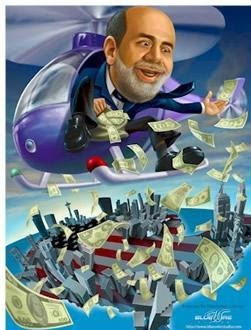 So by what means exactly are they going to buy Treasuries?

Ben Bernanke should be in a padded room - within a jail.

Here's an excerpt from a post I wrote one year ago:

So it's difficult to understand why investors would get all excited about the Fed temporarily buying up a few billion in government securities, when we've got a Federal government that's simultaneously and permanently issuing and then constantly rolling over many, many times that amount. It's an escape into dreamland to believe that Fed actions have any chance at all of providing more "liquidity" when the Federal government's deficits suck up in a matter of weeks every bit of liquidity that the Fed has provided in a year. These Fed actions are nothing but marginal tinkering around the edges of the global financial system, and investors are starting to catch on.

If investors think the Fed buying up a few billion of Treasury and agency debt means a hill of beans, they might do well to remember that the U.S. government is running up annual deficits in the hundreds of billions. In fact, the U.S. Treasury will float tens of billions of new debt in December alone (most of which will be sopped up by foreigners, who have increased their holdings of Treasuries by well over $200 billion in the past year). This will be mixed in with refinancings.

That was me quoting John Hussman. Read Nobody Verifies Anything!!!.

Shedlock has been saying to buy Treasuries for the past 12-18 months (I think). He's been dead right whilst shorts like myself have been taking a beating.

The last beating I took....was when I didn't buy a house in the latter half of a raging real estate market. How'd that work out in the end?

Look at this chart of the 30-year Treasury yield going back 30 years: 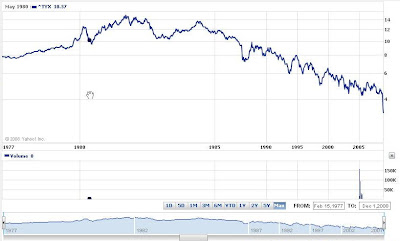 I like the odds for rates to rise and have my money bet accordingly.
Posted by CaptiousNut at 2:14 PM