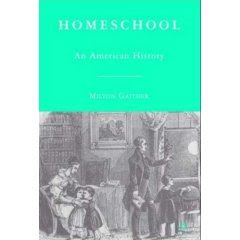 Author Milton Gaither recently wrote a book titled Homeschool: An American History. You can read the introduction on the web. Here's an excerpt:

While sweeping generalizations are difficult to make for such a broad time span, I will hazard a few here. First, education in the home has indeed been a constant throughout the period, but its social meaning has changed dramatically. We will see, for example a gradual shift from the colonial period when civil government aggressively enforced a certain sort of home education to the slow and voluntary eclipse of home instruction by other institutions, to the antagonism between home and school that has been a hallmark of the homeschooling movement, and finally to an increasing hybridization of home and school today. In my view something truly revolutionary is happening with the homeschooling movement that can only be understood if we take the long view. Historian John Demos once wrote that the history of the family in America “has been a history of contraction and withdrawal; its central theme is the gradual surrender to other institutions of functions that once lay very much within the realm of family responsibility.” But in our own time we are seeing a reversal of this longstanding pattern. Homeschooling is only the most obvious example here. Others include the rise in popularity of house churches among some conservative Protestants, the preference for live-in nannies and “au pairs” over day care among those who can afford it, the fashion of home-births by midwives among many “crunchy” Americans, home-based hospice care, telecommuting, and the like. Some of the fuss over homeschooling may be due to the fact that it has been on the cutting edge of a larger renegotiation of the accepted boundaries between public and private, personal and institutional. 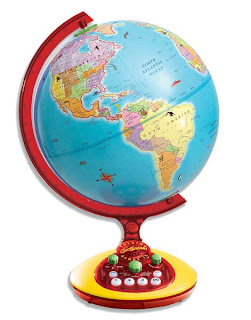 So my son just got this talking globe for his birthday. Yesterday, we were doing "continents". It asked us to find "Oceania". I was stumped.

I had no idea that it was another name for the continent/region of Australia.

Wasn't it a Oceanic Airlines plane that crashed on Lost?

Continued personal learning is just one of the many thrilling wonders of homeschooling.

I also recently learned about Ceres from my 4 year old son.
Posted by CaptiousNut at 8:28 PM


Okay, so, I had been meaning to do a post about the theme in that author's blurb about public life encroaching on home life at DoF for some time now but I don't think I'll ever get to it at this point, and this seems as good a place as any to bring it up, so here was the thought I was having:

What is the significance of "homework" in the public school system? Is it a tacit admission that schooling DOES NOT take place only in the public school classroom? Is it tacit admission that public schooling can not get the job of "educating" the youth done without monopolizing their time outside as well as in? Or does it highlight that learning is more efficient outside the classroom, and whereas children are typically imprisoned from 8:30-3:00 on a typical schoolday, where they "learn" practically the whole time, "homework" generally is only a few hours of time at night.

Or maybe "homework" is the way by which the public school system further encroaches on the family, as if to show parents, even outside of school, in the sanctity of your own home, we have command of your child's mind and time, as well as that of your family's?

Or is it something more genial... is it the public sphere trying to settle a truce with the private in saying, look, what you contribute to your child's development is important and worthy as well?

What do you think? "Homework," nefarious, or harmless?

John Taylor Gatto discusses *homework* along similar lines in Dumbing Us Down.

In fact, Mrs. C-Nut and I were discussing the intrusion of *homework* last night at dinner!

Nice site its very interesting site! your site is fantastic.