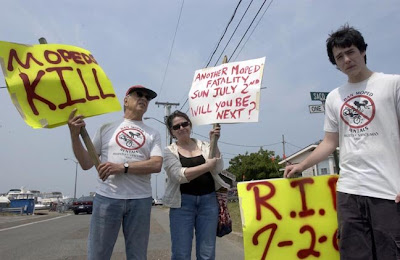 I was stopped at a railroad crossing near my house the other day. The commuter train (empty!) that went by had one of its cars painted. It was one big picture of a gas pump with the question "Why pay for gasoline?" or something.

What a joke. Remember, they just upped the price of parking from $2 to $4 per day at the train station lots. A working stiff will pay $1,000 to park over the course of a year now IN ADDITION to between $2,400 and $3,000 in total monthly train passes.

Just Friday night I met two people who are now riding their bicycles to the train station. Another said they were going to buy a moped for $2,000 and pay for it essentially through the $4 per day savings on parking.

I can see the headlines now, "Secretary Run Over While Biking To Train Station...Was Trying To Save $4".

I don't really want my wife riding a two-wheeler down a road full of harried, coffee-juggling, thumb-typing wage slaves in their BMWs.

Do you?
Posted by CaptiousNut at 8:07 AM