Everyone Knows But Ken Lewis 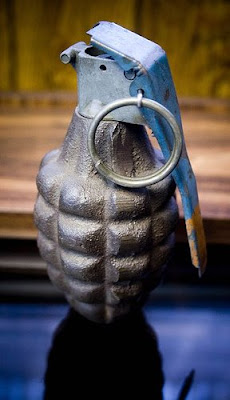 "There are some hand grenades on the balance sheet that are going to blow up on Bank of America," said James Ellman, a former Merrill Lynch money manger who is now president of San Francisco-based SeaCliff Capital LLC. "The cost savings are going to be nowhere near what they’ve already promised."

Executives including Rick Wagoner of General Motors Corp. and Ford Motor Co. CEO Alan Mulally have agreed to work for $1 a year. Asked by a shareholder whether he would agree to work for $1 a year for the next three years, Lewis replied, "No." He noted that Bank of America earned $5.8 billion during the first nine months of 2008.

Yeah, Ken, only if you throw all - including the heretofore FLIMSIEST - accounting standards out the window.

By the way, I didn't need to be a former *money manager* at Merrill to discern that Ken Lewis bought a ticking bomb.

I just used my Captious intuition!
Posted by CaptiousNut at 6:30 PM