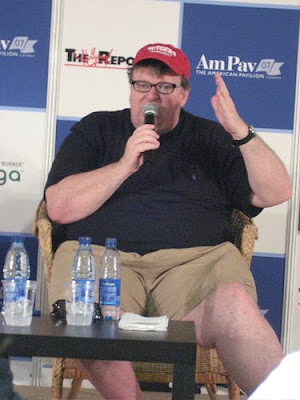 Let's take out that abacus:

I guess we're going to have to redefine *blue collar*.

Here is a good summary of Michael Moore's appearance on Larry King:

Moore's preferred solution is that "President-Elect Obama has to say to them, yes, we're going to use this money to save these jobs, but we're not going to build these gas-guzzling, unsafe vehicles any longer. We're going to put the companies into some sort of receivership and we, the government, are going to hold the reins on these companies"

One centrist defender of the free market took objection to Moore's central argument that the automakers had failed because they weren't building the fuel-efficient, well-engineered cars Moore believes Americans want. "Those gas-guzzling vehicles (SUVs and large trucks) have been the only thing propping up the U.S. automakers," argued Alan Carl Stewart. "Until gas hit $4.00 this summer, American’s loved their gas guzzlers and GM and Ford were the companies meeting the market’s demand."

"What Moore is suggesting is a step away from nationalization of industry," Stewart continued. "What’s really amazing is that he’s advocating that the government should do exactly what he says caused GM to fail in the first place. Read this quote from the interview ... 'Their attitude was we’ll build it and you buy it. We’ll tell you what to buy.' ... But I guess it’s different if the U.S. government is telling people what’s good for them."