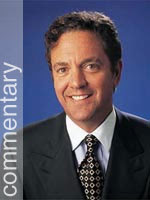 Throughout the crash of 2008 capitalism has taken it on the chin. The mainstream press has carpet-bombed us with headlines declaring things like "The End of Capitalism" and "The Reagan Revolution Is Dead." Ignored is an essential truth. Capitalism works only when accurate prices flow freely throughout the system. Capitalism works poorly when price signals are blocked or distorted. And that's exactly what's been happening for several years now.

On the other hand, more times than I can count, Rich has recently called for an end to mark-to-market accounting.

It's actually Step One in his Twelve Steps To Economic Recovery:

Step One - Admit our mistakes. Mark-to-market accounting rules have been a disaster. Let's suspend them or recalibrate them.

Of course there's an argument for this hypocritical exception. Though, I have yet to see Rich articulate it anywhere.

Heck, I could even make the argument for him.

BUT then I'd have to send him an invoice.

I've written on mark-to-market accounting before in Cyclical Hypocrisy On Wall Street.
Posted by CaptiousNut at 3:30 PM

Yeah, this one is chafing me now.

I own a bunch, have room to buy plenty more....but don't have any enthusiasm at the moment.

I thought $48 oil would be the ABSOLUTE floor. Shoot, it traded what, $43 today?