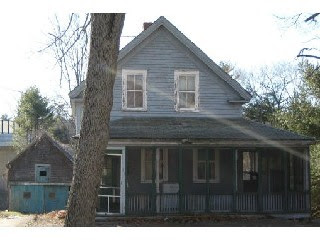 Should politicians rightfully be trying to deliver a *soft landing* for our economy?

I say no. All they've done with their *bailouts* is prolong AND aggravate the agony.

Take for instance the housing market. They have tried everything they can (lower interest rates, expand conforming loan limits, banning foreclosures in many states, etc.) to slow the pain of a housing market that wants to revert back to economical prices. Along the way, while they're *softening the blow*....all they really accomplished was to suck in more people at unsustainable prices. All they've done is sow the seeds for future foreclosures.

Take for instance the house above which is not far from me. This dilapidated shack sold for $249,000 in April of 2008. It needed a complete renovation. New floors, windows, walls, appliances, roof, siding. Quite frankly it looked like a house from Appalachia. All this has to cost at least $100,000, does it not?

Furthermore, it's not only on a busy road....it's on the train tracks!

Meanwhile, for the same price, one could rent a brand spanking new townhome ON THE OCEAN at the Hingham Shipyard.

This Avalonbay Community has it all: pool, gym, boat slips, next to the commuter ferry and shopping, AND you'd get 1,400 square feet. 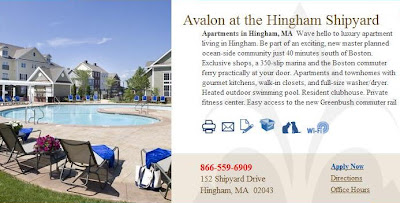 So who bought that dilapidated shack? I don't know. But I've twice seen a woman high up on a ladder painting it (in the rain both times!). Eight months later the house is still not renovated, still not inhabited.

[Taylor, you're not supposed to paint in the rain.] 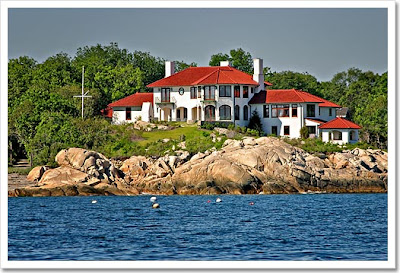 Note that the flippers were by no means limited to the *low end*. Above find the South Shore's Cary Estate. As the Boston Globe describes it today:

While the South Shore has fewer luxe mansions on the market than the North Shore, Cohasset's Cary Point estate is listed for $14.75 million. On the market since late 2007, the white stucco structure with a red tile roof was originally listed for $19.5 million. The mansion juts majestically into the Atlantic, providing a panorama of two private beaches and two deep-water mornings.

Built in the early 1900s, the house was once the summer haven of Henry Bigelow, a founder of the Woods Hole Oceanographic Institution. When the current owner, Tom Sullivan, the young founder and chairman of Lumber Liquidators, purchased it sight unseen for nearly $5 million in 2004, "The house was rustic. It was very much a purist summer cottage, like an Adirondack fishing camp," said listing broker Tom Hamilton, of Dean and Hamilton Realtors.

As soon as he took ownership, Sullivan began a massive gut-renovation of the house. While retaining its original Mediterranean-style exterior, he infused the house with custom contemporary elements. In a sharp contrast to the frozen-in-time Wyck estate, Cary Point exudes modernity. "It feels very South Beach," said Hamilton. "The interior is eclectic and hip."

Eclectic and hip? In Boston?

What do y'all think? 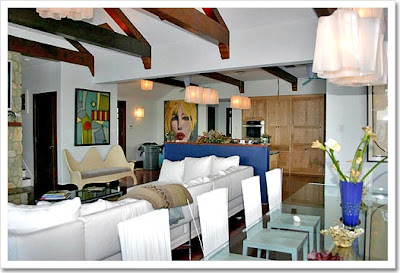 How about over-priced and butt-ugly?

The latest plan to prop up housing is so-called quantitative easing and the fixing of long term government interest rates at super-low levels.

That won't work either.

Related post - Our Speculator Takes His Loss.
Posted by CaptiousNut at 9:29 AM

I never paint in the rain, but I sure love running my sprinkler system on fullblast everytime a storms a-brewin'!