George Bush Co-Opting As Much Failure As He Can 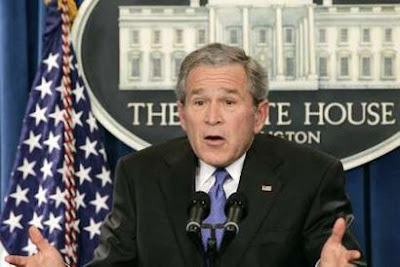 Under ordinary economic circumstances, I would say this is the price that failed companies must pay, and I would not favor intervening to prevent the automakers from going out of business. But these are not ordinary circumstances. In the midst of a financial crisis and a recession, allowing the US auto industry to collapse is not a responsible course of action.

My economic advisers believe that such a collapse would deal an unacceptably painful blow to hardworking Americans far beyond the auto industry. It would worsen a weak job market and exacerbate the financial crisis. It could send our suffering economy into a deeper and longer recession, and it would lead the next president to confront the demise of a major American industry in his first days of office.

I would say that under EXTRAORDINARY circumstances, Presidents have to make tough decisions and show leadership.....any spineless turd can pander, triangulate, and boot today's problems down the road.

So while Bill Clinton was selling pardons in his final hours....George Bush is lucubrating on how to get his name emblazoned on as many failures as he possibly can!
Posted by CaptiousNut at 8:24 PM

I think that word is in every dictionary!