Please Prop Up Our Pathetic Competition! 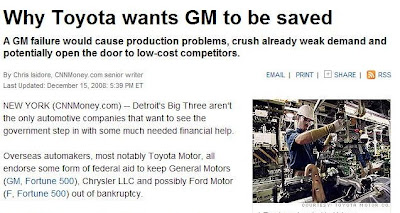 NEW YORK (CNNMoney.com) -- Detroit's Big Three aren't the only automotive companies that want to see the government step in with some much needed financial help.

The Senate killed an effort to get the automakers a stopgap loan last week and now the Bush administration has said it is looking at providing the automakers help from the $700 billion approved to bailout banks and Wall Street firms.

Here's the link to the full article.

Forget this nonsense that Toyota fears *disrupted production* from a Big Auto bankruptcy, the REAL STORY, their REAL MOTIVES are articulated here:

The final concern for the overseas automakers is a longer-term problem. If a U.S. automaker fails, that could open the door for a Chinese or Indian automaker to buy up the assets of the failed automaker and create a new low-cost competitor in the U.S.

"You could open the door for foreign companies to buy distressed assets at rock bottom prices," he said. He pointed to India's Tata (TTM) and China's Geely, as two automakers in the developing world that are already on record as being interested in expanding into western markets like the United States.

"Tata and Geely would be incredibly open to brownfield sites," he said, referring to the term used to describe companies that buy discarded industrial facilities.

Posted by CaptiousNut at 6:52 PM

TM has a bunch of cash... why don't THEY buy the sites and implement their own low-cost production system?

TM announced today that their new Prius factory being built in Mississippi, which is 90% complete, will be finished, but that they will not install equipment and will not hire any additional employees to staff the factory.