I guess I kind of knew the CIA had no authority to operate within the United States. And in the video (watch it!) Jesse offers evidence they do so anyway. I guess what's to be surprised? Every arm of Big Government has become a mandate-enlarging, self-perpetuating monster, right?

I just read some of Jesse's Wikipedia entry. It's pretty interesting.

Note that from the 3 min 50 sec mark to the 5 min mark in that clip Jesse discusses how the CIA interrogated him after his election victory. "How did you get elected?", they wanted to know. *Independent* governors are hardly welcome in our political duopoly. And this point gives credence to that weird Alex Jones video I posted in On The Elite.

If you remember, in that clip he talked about the two parties propping each other up.

Independents aren't welcome anywhere in the realm of Big Government - not even in grade school classrooms! 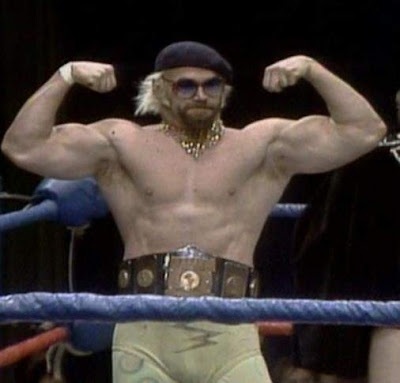 Posted by CaptiousNut at 9:08 PM

How does your wife feel about the fact that you have a life size poster of *the Body* above your bed?

The poster is hers!

I have a bobble head of Jesse Ventura sitting on my computer desk, and each time I sit down and turn on my CP I flix the bobble bubble head just to watch him bobble like the ideoit he is.
Watch the 2 minut video of Jesse Ventura and Dean Barkley bribing Bill Dahn to change political parties so he could win the 1998 Minnesota's Governors Race.
.
www.BillDahn.com