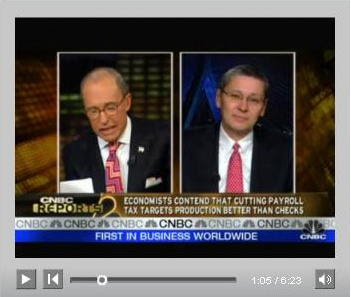 Larry Kudlow - Which would give a bigger jolt to the economy: lower taxes or bigger government spending?

Greg Mankiw - Well the standard textbook Keynesian theory suggests that if you're interested in increasing aggregate demand, a dollar of government spending is going to generate more demand than a dollar of tax cuts but there's actually some evidence that suggests that's not exactly true....that tax cuts may do more in terms of stimulating private investment than will government spending. And so I think the really[sic] question is what's the government spending the money on and is it things we really need. If it's things we need and are useful that's fine. But if there not things we need it's probably better to use the money for tax cuts.

I think it's important to once in a while post Mankiw's fence-sitting, wack-ademic cant.

Greg, Big Government gimp that he is, thinks we need only deal with *how the government* spends our money. He won't dare call the public treasury what it is - ill-gotten, un-Constitutional confiscation.

You see, Congress shouldn't have the money in the first place. The question of what they do with it post-theft is at once a deflection and a submission.

Larry Kudlow's tack is transparent. To further his *advocacy journalism*, he hauls up willing stooges like Greg Mankiw (and buffoon Jerry Bowyer), flatters them ("number 1 economics blogger in America"), and tries to get them to agree with his tireless perma-bull agenda.

Yeah, I'm for *tax cuts* Larry. But I don't need to propagandize and adorn my arguments with unctuous pseudo-intellectuals from Harvard.

Larry, Mankiw didn't give you one straight answer. And why would he? You didn't (couldn't?) challenge him in the slightest.

Thanks, Greg. Your value-added is off the charts!
Posted by CaptiousNut at 1:59 PM

STFU about people who read the Boston Globe can't open a browser. What a vacuous comment. I doubt you're a trader.

Here is what got SherylH's panties all up in a bunch.

Y'all see what I have to deal with up here in Boston? She sounds like a real catch, this Sheryl. Ain't nothing like a chick that bandies about "STFU" while trying to assert her intellectual competence!

Y'all see why West Coast Tom bolted out of Boston?

I think you don't understand the economics profession, you might better off sticking to something more within your ken.

Hard questions don't have easy answers - there are many points of view and that is the point of the intellectual discourse.

Why you have an ax to grind is beyond me, but Mankiw is a highly respected economist who takes the time to inform the public thru his blog and thru the media. You ought to be grateful for that, rather than resentful. Could it be that you're just another bitter BU (or, worse yet, Yale) grad?

I ought to be *grateful* to Greg Mankiw?

Please, do tell me more.

Every time I think I've come across the full gamut of Morons another new species rears its head.

You can always tell an asshat by their insistence that "hard questions don't have easy answers" and that every effing thing on earth must be "discoursed" in an intellectual matter until we're all "dead in the long run" a la Keynes so that it doesn't even matter if we reach any conclusion in the end.

Mankiw is highly respect amongst who? Political bootlickers? Entrenched, feel-good academic lifers? The suckweed brainless average dupes that latch onto and follow both in the hopes of personal salvation and a meaningful life?

Mankiw never, EVER says anything about his own opinion because he DOESN'T have one. He has found it fit to point out the obvious in every situation, that being that many people debate many subjects, and has contented himself in watching idiots like you lap these observations up like divine wisdom in a milk saucer.

Did your comment at TBP contribute any value? Read a bit of your blog. I was half right: you're a trader but a big LOSING trader. I live in a warm climate far, far away from Boston (and you, thankfully). Nice profile photo - you must hang out at Boston's Ramrod club. Have fun freezing this winter while I wear my teeny weeny bikini and trade futures by my pool.

I think all The C-Nutman was saying is that no one reads the paper any more. But since you started it...

I'm in Marina del Rey, CA. You anywhere near there? How about I stop by to *talk futures* and see your *teeny weeny* tarp-size bikini? Furthermore, this is a pretty tough market...I'd love to hear (see?) your positions.

My guess is that we'll never hear from you again...

First off, your *homophobia* will not be tolerated in this forum. Me, and many of my readers are staunch supporters of lesbian rights. AND, we've been so for a long, long time, well before it became *fashionable*.

Furthermore, no one is going to believe you sit by your pool in a teenie weenie bikini trading futures until you post a picture.

While I'm waiting, perhaps I'll read a bit of my blog - as per your suggestion.

Funny Stuff. How the heck did SherylH let that comment get her thong in a bunch? Any woman who claims to be wearing teeny weeny anything, obviously has confidence problems with their physical dimensions. It reminds me of the movie Friday, when a rather large plump woman tells Chris Tucker over the phone that she looked like Janet Jackson.
Kfell