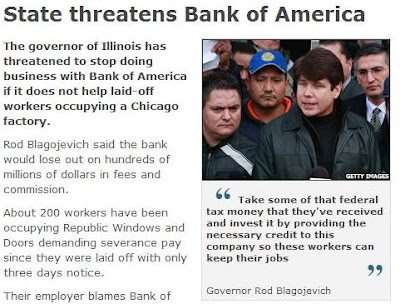 So Bank of America turned off credit to a deadbeat, bankrupt borrower and the socialists are pissed. (link)

And now here is our *messiah*, Barack Hussein Obama weighing in on the matter:

President-elect Barack Obama also expressed support for the workers occupying the plant and agreed that the money given to banks needs to benefit the rest of the economy.

"It's also important for us to make sure that the plans and programs that we design aren't just targeted at maintaining the solvency of banks, but they're designed also to get money out the door and to help people on Main Street," Mr Obama said.

Can you imagine, banks worrying about that insignificant detail - *solvency*?

What a blithering idiot!

You watch, Ken Lewis will probably give in to the public extortion.

Of course, he'll have to *cut other people's pay* to do so, in one fashion or another.

What's absolutely astounding is the impunity Big Media has granted Obama to espouse pure idiocy.
Posted by CaptiousNut at 8:14 AM

Governor Rod got busted this morning, I'm thinking that the economy might be a little less important to him than say.....shower room fears and which prison gang to join. I think that he would prefer the skinheads judging by the mane he currently sports.

Two Dogs beat me to it. The plot thickens...
Kfell

Eliot Spitzer is off the hook now as the biggest Political Moron of 2008.