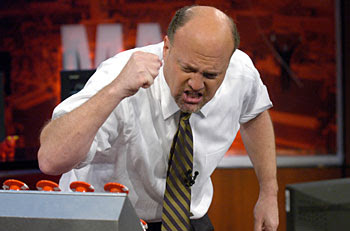 Since I'm a part-time trader, and don't really do copious research, I learn about stuff somewhat slower.

Not long ago, someone posted a comment on my blog about Cramer and him jawboning to *ban short ETFs*. Of course I saw it but didn't pay much attention.

But I was on the treadmill last Friday and saw a bit of Cramer - thankfully on mute. He was inveighing against those Ultrashort ETFs that I trade so much these days. Essentially, though he won't admit it, he scapegoats the ETFs for his losses in JP Morgan and Wells Fargo.

"We reject the notion that short ETFs harm the markets," comments Dan O'Neill, President and Chief Investment Officer, Direxion. "Healthy markets are designed to discover the proper price levels for whatever is being traded. Most people recognize that permitting short selling simply adds robustness to price discovery. Those in favor of banning shorts are trying to manage the market higher by silencing one side of the argument. This is generally self-defeating and harmful in anything but the very short term." O'Neill also observes, "The recent housing bubble - which was caused at least in part because it is not possible to short housing - shows the danger of one-way markets."

What do the Assets Say?

Before you believe the propaganda of agenda pushers who argue that short ETFs are harmful to the stock market, look at the facts. Fund providers like ProShares, DirexionShares, and Rydex Investments each offer ETFs that play both bull and bear markets, not just bear.

O'Neill observes a similar trend at his Boston-based firm, whose ETFs were launched late last year. "Each of the Direxion Shares long and short ETF pairs is, and has been, for the majority of their brief existence, net long." He adds, "Although we believe it would be perfectly fine and consistent with healthy markets if the pairs were net short, the fact is that they are net long, meaning they're adding to market demand."


In the following clip, skip forward to the 1 min 10 sec mark for a litany of Jim Cramer's big calls bombs:

Did y'all know that Jim pounded the table on the now essentially zeroed-out Countrywide Financial? 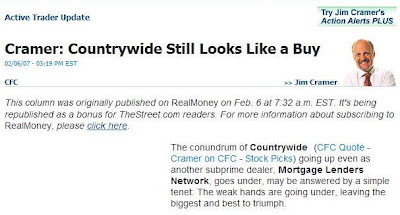 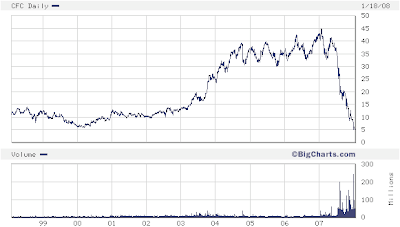 I can't find the initial buy note (article expunged?) but Jim definitely said to buy Countrywide - AT THE TOP - at $44 per share or so.

Did that company go belly-up because of ETFs?

Rightfully, the SEC, if it's going to make any fascist moves, ought to ban Jim Cramer from television.

Will CNBC pull Cramer off the air because his *calls* have been so bad?

His ratings are way up. He's probably in line for a raise.
Posted by CaptiousNut at 9:43 PM

Cramer and Jon Stewart are going at it tomorrow on the Daily Show - should be good.

Have you seen this little Cramer video yet in which he admits to market manipulation?

jon stewart had some nasty words for cramer, no?