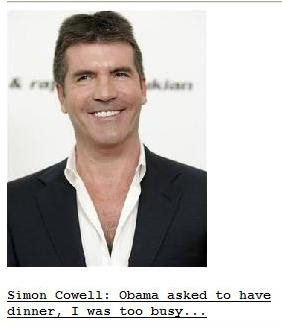 So Simon's too busy to dine with the head of the Communist party?

And the other day, he ripped Hell's Kitchen's Gordon Ramsay during an American Idol broadcast.

Ryan Seacrest asked the chef (in the audience) what he thought about one of the performances. Ramsay started talking but no one could hear what he said because he hadn't a microphone. With nose pointed skyward and in that arrogant British accent Cowell quipped, "See, he doesn't know what he's talking about."

What made it so hilarious was who Ramsay is. He's a lunatic know-it-all belligerent in his own right. But Simon dismissed him like a booger on his thumb-tip.

You gotta hand it to Simon Cowell. He gets paid a jillion dollars to make snide remarks on a karaoke show. Who amongst us would relish that job?

Furthermore, and no small boost to his ego, he can instantaneously slay all opponents with his Captious and caustic wit. The best his critics can do is rip his gaudy threads.

[Note that Morons necessarily descend to this tack with me as well. See - $90 Jeans and Morphing Into My Father.]

Apparently, Simon is turning into a bubblehead celebrity as it's quite hard to wipe that smile off his face these days.

But his hectoring wit conjures up memories of another bombastic Brit - Samuel Johnson.

Johnson was so intellectually and conversationally domineering that his table-mates were scared to death to espouse their usual loud-mouthed opinions. When Johnson was dining, only the brave and foolish engaged his towering personality; the rest wisely concentrated on mastication.

Of course, I have the same exact dinner-time effect. There's a whole lot more emphasis on the food at extended family get-togethers when C-Nut's there - especially from the 'old coot' Massachusetts contingent.