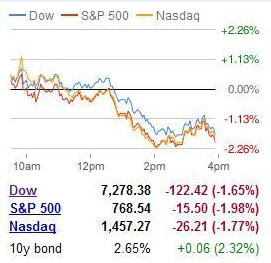 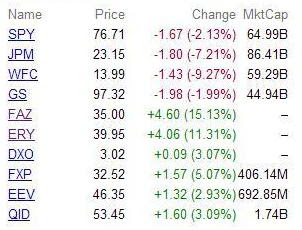 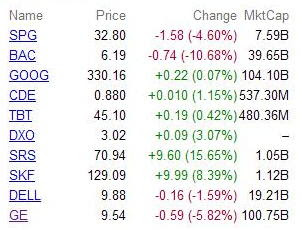 Yesterday, I grabbed some GE March 10 puts for the bargain price of .05 apiece. With only a day until expiration I need the stock to drop right away. Thankfully it did.

I bought stock against them 1-to-1 at 9.35 today - effectively selling the puts for .65 less commissions.

Unfortunately the stock went no lower than 9.26 so my *double bushel* of March 9 puts expired worthless.

With Dell trading just a bit above 10.00 in this *overbought* market I tried the same tactic. I bought a bunch of March 10 puts for .08 (after just missing them at .03). The stock obliged and quickly broke the strike. At 9.75 I hedged half of the puts; and the rest were taken off for even at the close, at 9.91.

Question for Taylor - How much money did I make on those Dell puts?

Today I also dumped that SKF I had bought at 127.16 on Tuesday. I lost a full four points - selling today at 123.23. All in all, it felt like a winner considering the darned thing traded as low as 100.15 yesterday morning!
Posted by CaptiousNut at 5:04 PM