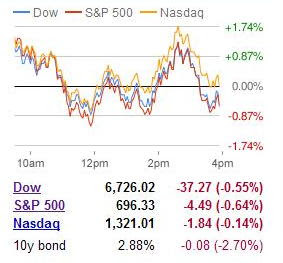 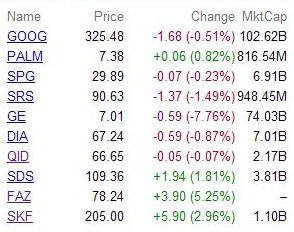 The markets tried to rally but couldn't hold on in the final hour. That's the type of price action you'd expect in a bear market. (Yeah, it's indeed a bear!)

Here's my dimwitted strategy - if it bounces quickly, I'll let it out. It will have been a *trade*. If it wallows here or crashes further, I'll just maintain that from the get-go it was an *investment*!

Seriously though, these days I won't make any substantial trade that I'm not comfortable holding for a while and averaging into.

Bear in mind that when I buy a substantial chunk of market bellwether GE, it won't entail the same risk as you or most others would. I have ZERO long exposure to the markets. And I'm talking retirement accounts and whatnot. Z E R O.

I did make one roundtrip trade today. 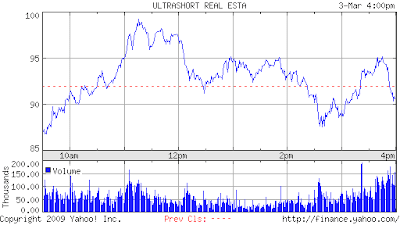 It looks like my baby, er largest position, traded up to 99.49 today.

I did not see that apex as I was at ballet with Princess C-Nut.

I'm thinking about getting a Verizon Wireless AirCard for my laptop. Does anyone have any experience with that thing? It looks like it's $100 to buy the card and then $60 per month with a 2 year contract.

This way I can blog from ballet, karate, the library, or the park. Rightfully, Taylor should pay for it, no?

No music tomorrow. Apparently there are no Wednesday songs!
Posted by CaptiousNut at 8:45 PM

Explain, once more, why I should be paying for your VWirelesss Aircard?

Also, Denninger was going batty today about someone buying 50,000 June puts on GE or something like that... says it portends the bankruptcy of the company... so let's hope you aren't investing in GE now!

Who's taught you more - moi or NYU?

How much was spent on the latter?

50,000 puts is nothing on that thing. Only covers 5 million shares and there are 10.56 billion outstanding.

The biggest single option trade I ever witnessed was in DELL maybe 10 years ago. Market was getting crushed, stock was hammered, some idiot came in and bought 17,000 puts *at the market*. The specialist moved them up 3 bucks and said, "sold".

Stock got hammered as pit traders whacked it. But that was the absolute bottom for Dell and the market - (option) volatility got crushed. One guy I knew from that option pit sold 2,000 of the puts.

These big trades are hard to read into. It could be a panic capitulation like Dell above.

Or the buyer could be *buying puts and stock* one-to-one. I witnessed that in BRCD years ago. Customers kept buying tons of puts, and the stock went straight up. Punch up a long term chart on that baby.

Markets were up in premarket because China says their manufactoring is improving and can see the light at the end of the tunnel. So let me get this straight, we see our govt "re-adjust" their figures all the time whether it is unemployment and gdp or god knows what else. And yet, we take China's word that their economy is improving. SELL into this market. Exception, I had a limit for GE fill at 6 bucks. Put in a limit to sell at 7. Half way there...DXO jumped again but upset despite having a long position. I was hoping to double up a 2. This etf decay is to sophisticated for a UNH grad. I will take your word for it.
Kfell

Thanks for the lessons. I've been using the Verizon card as my primary means of internet access. I also use satellite to access the internet as I'm in a rural location, but the Verizon card is faster and more reliable. It's especially handy when I'm traveling. Same access no matter where I'm at.