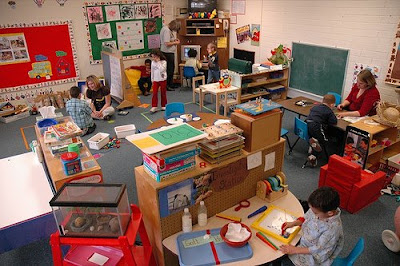 The only intellectual arena where I am weak is the finer arts. One might even say I'm *culturally illiterate* - though I've been making inroads in the past couple of years.

So while I can competently teach my kids reading, writing, history, and definitely mathematics I'm incapable of introducing music, art, and dance. This will have to be outsourced.

It just so happens the local arts center has a pre-K program that presumably fills this very need of ours. (It would start in September for my son.)

My wife had checked the *school* out already and wanted me to go observe as well. On my way out the door last Friday she admonished me to "be nice to them".

Apparently this particular pre-school is *invitation-only* - and we know others who've taken their kids to observe and never heard back. Plus, apparently I have a proclivity to be *not-nice*. Who knew?

"Whatever," I said, "As far as I'm concerned, I am INTERVIEWING them!"

I took my son the other day and we stayed in the *class* for about an hour. Kids were painting - but not unlike where they do elsewhere. I saw no formal instruction - no emphasis on perspective(?) or anything.

The teachers excitedly showed me a letter book that the kids were working on. Today they were tracing the letter K.

Couldn't these 5 year olds write a single letter freehand? That is a 3 year old skill.

I told them my son was so far beyond that; that he was full-fledged literate; and they quickly changed the subject. [Later I had him demonstrate his ability to multiply.]

What about the *arts*?

I got only vague answers. And all I witnessed was that they piped the room with classical music during *free play*.

So how'd the interview turn out?

Well, the school did OK but it didn't wow me by any stretch.

I don't really like the fact that it's four days a week. Next year I'm comfortable with two, maybe three days of this glorified babysitting for my son - four is pushing it. [Four days a week, three hour sessions.]

If it includes school vacation weeks, then it works out to $12.45 per hour which doesn't sound that high but I maintain that it is - especially considering that it's more hours than I want to begin with. And it's really only cheap compared to the $34 per hour Montessori school nearby.

They loved my son there. They were astonished how he went right up to and *socialized* with all the other kids even though he's a full year younger.

[My eyes rolled more than a few times.]

My wife's admonition was practical. She said be nice so that WE have the option of sending Prince C-Nut there. She said, "let us make the decision, not them."

In that vein, I was going to have my son send an email thank-you to the teachers this weekend but didn't get around to it. What do ya know, in the mail Monday was an "acceptance" letter from this pre-school. Heck, they must have sent it out the second we walked out the door on Friday. At least the email was no longer necessary.

Either they really need kids for next year or my son impressed them. And how could he not - given the gross infantilization of his age-mates?

There'll be no rush to write a check and reserve his spot. The school's *application* for my son is under review.
Posted by CaptiousNut at 10:32 AM

You should school your son on the fine art of Wilson Phillips, Bon Jovi, Europe, and other classics from your youth so he will have a leg up on the students of this school.

Nice going ace - that nearly cost you your son being accepted to a decent college institution, his future career, skybox seats etc!

Ah, you don't have time for my off-topic posts.

Go find me some trades, will ya?

I started re-shorting today, yeah, too soon as well.

But I've got plenty of ammo.

The uptick rule isn't going to change a thing. But we all know that.

Of course, a *short ban* would be far more disruptive.

I have been buying faz down and got my basis to $70.39. the moment it hit my limit at 73.95, it fell off a cliff. oh well, good day for trading and I keep telling myself the same thing as far as nothing changes, but easier said than done. At least mark to market was kept in place.
Kfell