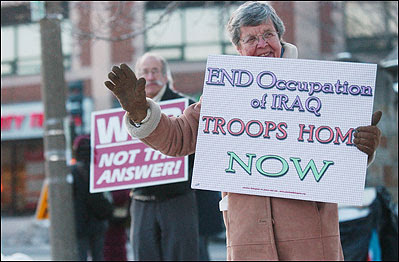 In front the nearby Hingham (MA) post office, there's occasionally a bunch of queer 'old coots', dressed in rags, waving peace signs. It's an odd sight to say the least. Where is the war anyway?

Clearly, they are unrepentant, 1960s hippies who never *got a life*, right?

Apparently, all the tony little towns around Boston have these time- and brain-warped protest groups.

And the Boston Globe has an article today that confirms my prejudice:

"The invasion of Iraq was a horrible thing, so I started coming because I thought I’d go out of my mind if I didn’t do something," said David Ascher, 61, who protested at anti-Vietnam sit-ins as a student at City College in New York...

Linda Stern, 67, of Newton, was active in demonstrations during the Cuban missile crisis in 1962 as a student at Carleton College in Minnesota, and marched to protest the Vietnam War in Washington D.C...

There are plenty of legitimate reasons for being *against* the goings-on in Iraq and Afghanistan....

But you'll never hear any of them from these 'old coots' and 'old bags'.

Imagine if YOUR brain had permanently ceased to evolve while you were a college student.

Almost as bad for them is the tragedy of being walking-stereotypes.

How depressed would you be if a passing motorist could read your life's tale in an instant?
Posted by CaptiousNut at 12:54 PM

Email ThisBlogThis!Share to TwitterShare to FacebookShare to Pinterest
Labels: boston