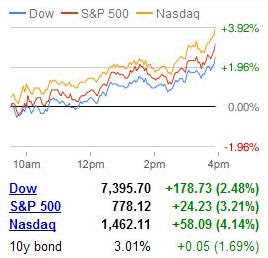 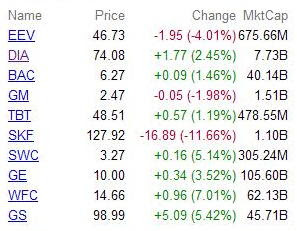 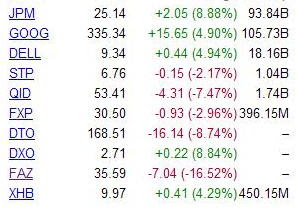 Bad day today. Most of yesterday's paper gains were erased as the market continued to squeeze the shorts.

The morning started off inauspiciously as I got a phone call to cover my XHB short. If you remember, I tried unsuccessfully to borrow that ticker back in February; as an end-around, I bought deep puts a tad over parity which automatically exercised. So I stayed short for one full month under the radar. What sucks is that I had to cover this POS at 9.97 after just missing it this morning at 9.47 (never mind at 8.00 last Monday). Looking back to when I put this trade on, it seems I still made .89 of profit - not bad, but should have been better. I have to admit that I completely forgot about the possibility of them calling this position away.

I tried to buy a bushel of March 9 GE puts at .13 on the close but for some reason I didn't get a fill even though it looks like they were offered at .12. I'll try again in the AM.

Unfortunately, I think we have some more squeezing ahead of us - and at least four weeks before reality descends upon the equity markets again.

I'm going to sit back some and try not to watch, and add to losing positions.
Posted by CaptiousNut at 8:17 PM

Only the most sweet, Thailand-based Swiss investor evar!

The man called for a strong bear market rally through April due to his contrarian sentiment observations.

Check out the blog of some guy who collects his quotes, recent advice/observations and video clips here: Marc Faber Blog

Also, he writes his "Gloom Boom and Doom" newsletter, search google for the site. You can request some back issues as a sample and they'll send you links for like 7-8 newsletters, you should check them out they're... PRESCIENT reading material. I hope I used that word right...

Tell me what you think!

(Despite the sarcastic tone of this post, I actually respect the man quite a bit.)

I know full well who Mark Faber is.

Have you ever heard of Kevin Gamble?

In response to your question: No.

I should've figured you knew who MARC Faber was... I also probably could've realized that if you somehow were unaware of him, you are so Google savvy you would've looked it up on your own. I suppose I'll go do that now with Kevin Gamble.