So Y'all Still Want To Be Traders? 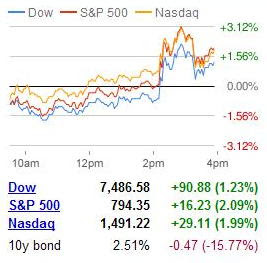 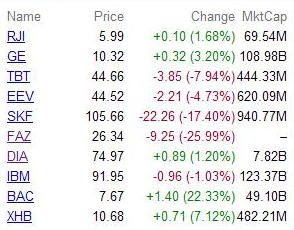 I was out all day at the parks with my kids. A balmy 56 degrees after a long winter is hard not to jump at.

This garbage rally - garbage rallying on garbage news and garbage logic - will surely fade. It's going to take some time though. By my rough count, there were 4 bullsh*t rallies last year, all of which retraced. I rode out every one of them with heavy losses followed by moderate-substantial gains.

In a mere 8 trading days, the FAZ - the triple-short financials ETF - has gone from an intraday high of 115 to today's close of 26.

Incidentally, I doubled up my position at 26.15 in the after-market.

I messed up in GE today. Yesterday, after the close, I tried to buy some March 9 puts. Curiously, I wasn't getting filled. I figured my brokerage had some BS rule about trading options after the close.

So this morning, I went back in. Paying .13 for what I tried to buy yesterday.

Later on, I noticed that my order from yesterday they held until this morning - and executed on the open. So I ended up with twice as many now-worthless puts as I wanted.

When it rains, it pours.

Hopefully I'll get some money back in the next few weeks as I've got to pay my taxes for last year pretty soon.

[Today the Fed had some BS meeting where it said it was going to *buy* long term Treasuries - with more debt!]

The FOMC statement was full of surprises, albeit in the Fed's typical bland language. The Fed committed itself to buying another $750 billion this year in mortgage-backed securities issued by "agencies" like Fannie Mae and Freddie Mac, on top of the $500 billion it had already committed to buying. It doubled to $200 billion the amount of agency debt it will buy this year.

And in a surprising change of direction, the Fed said it will buy $300 billion of longer-term Treasury securities. Up until now, Federal Reserve Chairman Ben Bernanke had said there was no need for the Fed to buy Treasuries since there was a strong market for them already. The Fed's new thinking seems to be that it can't hurt to try a little Treasury buying in hopes that the money will trickle down to non-Treasury securities. It said the goal of the Treasury purchases is "to help improve conditions in private credit markets."

Who amongst y'all believes our government at all capable of improving the economy?

They've thrown everything including the kitchen sink at the markets in the past year or two and what exactly has it wrought besides a bunch of great *shorting* opportunities?
Posted by CaptiousNut at 5:24 PM

the first chart you have on this post looks like the classic head-and-shoulders is forming. It won't be long now. How's that pun?

You won't believe this movie I'm working on - crazy. It's seems like almost everyone involved has an academy award!

Personally, I would love to be a trader - lumps and all.