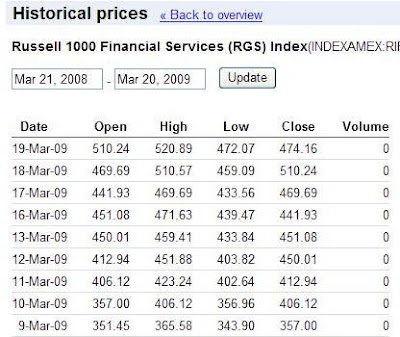 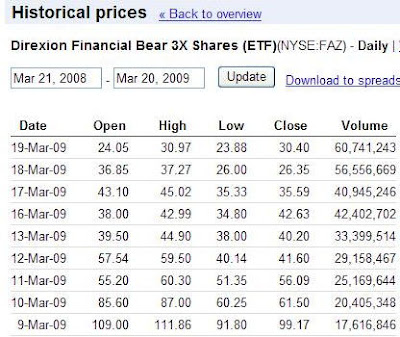 Above find historical prices for RIFIN - which is the underlying index for FAZ - that *triple-short* financials ETF I've been trading. It's also the underlying for FAS - the *triple-long*.

I've discussed, at length, the concept of ETF decay. Here I will try to quantify precisely how badly FAZ decayed during this recent bear market rally. [The S&P 500 has rallied from 666.80 to 803.00 in the past two weeks.]

The first whammy was on March 10th where the underlying (RIFIN) rose 13.75%

Let's call up that formula I derived:

Lemma - Given an underlying A and its daily compounding triple inverse Z, a drop of R-percent in A which retraces fully the following day will DECAY Z by:

Allow me to clarify.

In other words, none of you would-be Captious nerds out there need waste your time trying to poke holes in my Kevlar analysis.

By extension, the three other large *up* moves in RIFIN also induced substantial decay into FAZ.

So what exactly should I do with these numbers? How should I aggregate their collective decay?

A straight up compounding via multiplication yields:

That means that roughly and theoretically speaking, a complete retrace of the squeezing FAZ underlying would only get that ETF back to about 56.00 - a far cry from it's value of 98.50 with the underlying at the same exact level.

So by utilizing both methods, we can safely presume that the new backward-looking high for FAZ is somewhere between 50.00 and 56.00 - a sufficient guestimate for our purposes.

What does this mean?

It certainly doesn't mean that FAZ will never rise above 60.00 or eclipse its recent acme of 115.50.

That is still 100% possible. We'll just need much lower lows in Goldman Sachs, JP Morgan, Wells Fargo, and a sufficient number of other financials for it to occur.

It also means that those simpletons on xTrends comment threads drawing all sorts of lines on FAZ charts are complete Morons.

And, lastly, it means anyone sitting on a recently acquired high-cost-basis FAZ position ought to at least reduce their expectations accordingly. 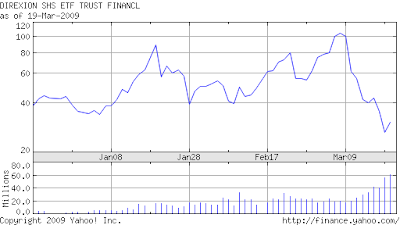 What are the odds that this leaked memo at citi will be nonsense? How much wealth changed sides on this manuever. Out of all the news, the american public is fussing over $165 million in bonuses to aig, while dc continues to pull rabbits from their hat destroying the long term viability of the republic.

So, are you back to considering selling a put and a call on FAZ?

No, not now - and that *paper trade* straddle was in its little brother - SKF.

Which I deftly took off for a profit!

Thank you for catching that *typing* mistake. I've corrected it.

Pat yourself on the back. Thousands have read this post and you were the only one to catch the extra zero.