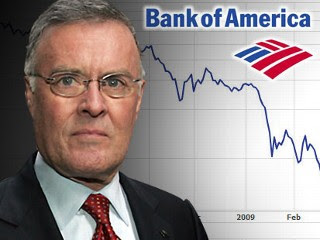 Someone I know who heard his speech told me that he looked *absolutely terrible*; he was thin, ragged, and frayed around all the edges; but this is only fair...

I've been informed that he now has five full-time bodyguards.

And that the entire city of Charlotte wants to kill him - figuratively speaking of course.

Then again, he does have all that *security*.

One has to realize how many BAC stockholders there are down there who just gotten hammered as the stock's come down 90% from its peak.

The other day I randomly met someone who works for Ken Lewis' bank. Without being too specific, let's just say he's doing a lot of merger integration work with Merrill Lynch. He's traveling almost everyday to NYC (from Boston), often for a week or two straight. Let's just say that he's beyond depressed.

First of all, his BAC stock holdings have been effectively wiped out. Secondly, he's working his tail off with no shot of a bonus or a raise EVER on the horizon. Mere job security is his best outcome.

Lastly, and *worstly*, he says his Merrill peers, into whose department he's been consolidated, he said that they all earn *3 times* what he earns - and that they got paid 90% of their target bonuses last year.

I got the stark impression that this guy was going to quit pretty soon. So add to the vast collateral damage of Ken Lewis' idiocy the loss of one *cheap*, *hardworking* employee. [And then multiply it by a suitably large number.]

If only Ken had the best *mindguards* money could buy....

To see everything I've exposed Ken Lewis on - click here.
Posted by CaptiousNut at 9:53 PM

I'm not the sharpest tool in the shed, but I am going to guess that buying Ken Lewis' Greatest Hits album is not on your horizon.

That guy is one stubborn Moron.

Rightfully he should be fired, have his past wages *clawed back*, and maybe even thrown in jail.

But perhaps a worse punishment is, well, staying on as CEO and taking the daily onslaught of well-deserved abuse.

The guy is so stupid he's meted out his own worst punishment!

How does the fed buy $300 billion of treasuries from the treasury? One government agency buys debt from another to create a demand? for treasuries. Doesn't this help foreign investors at the expense of US taxpayers? Can someone explain this so a 2 yr old can understand?

The end is nigh...
Kfell

It's almost like paying off your mortgage with your credit card.

Then paying off your credit card with a HELOC.

The only thing more Moronic than the logic of it all, is the sheer number of idiots waxing bullish on the idea.

The Fed is going to issue over a trillion of its own notes - a point barely audible in the reportage this evening.

Who's going to buy those?