Twice in the past week or so I had to endure that childish video game, Nintendo's Wii.

Once while my four-year old played it at a friend's house.

And the second time at a *Wii party* the other night with a bunch of 35-40 year old men.

Did I play either time, of course not. I sat down, enjoyed *premium beer*, and pondered societal decadence.

As a general rule of thumb, I try to stay away from the entertainment, pastimes, and toys designed to enthrall small children. 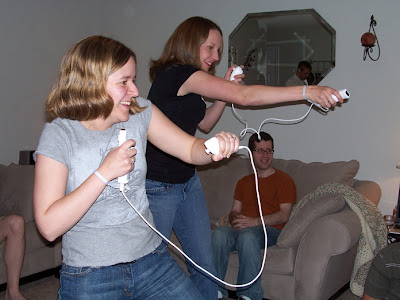 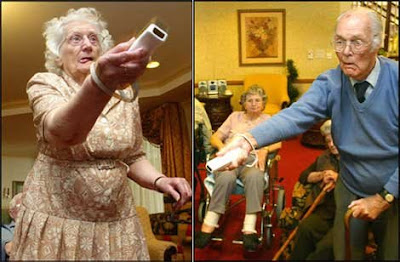 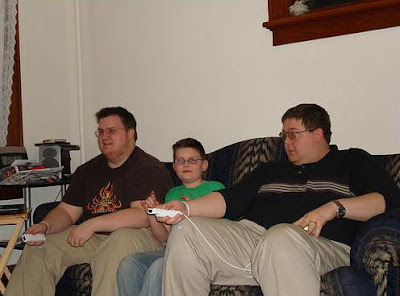 How bad do these lazy @sses look next to the nursing home 'old coots' and 'old bags' who dropped canes and walkers to stand up?

Point of fact, I haven't touched a video game console since the first Nintendo (with Super Mario Bros. in 1990). That's right. I never even touched a Playstation or whatever the other popular console was back in the early-mid 90s. Nor have I ever even seen an Xbox.

So no iPod, no Facebook, and no video games. If you want be me, you're going to have to shed the frivolous amusements!
Posted by CaptiousNut at 8:24 AM

I played the tiger woods golf game about 3 months ago and that was the first and only time in probably 5 yrs. But the IPOD or P-Pod as one of my redneck friends calls it is awesome. I have over 300 cds from my days as a youth and unlike others, my collection ages like fine wine and have songs for any generation. Whether its Sinatra or Willie Nelson to Tool or Snoop Dog. For people who commute, its a good way to listen to books you normally don't have the time to read as well.
Why do I get the impression in 30 yrs, you are going to be sitting on your porch and complaining about the cars driving by blasting their music? or do you already do this?
Kfell

Lighten up ya premature old coot. The Wii can be fun. I am betting C already complains about the cars driving by-music or now.

Wow, what an enlightened and reasonable rant against a technological system you willfully did not engage with.

Can it look ridiculous while one plays it? Definitely. Is the technology powering the system fascinating and breakthrough in a lot of ways? Definitely.

You know, I guarantee you it'd take one round of co-op Mario Kart Wii play over the internet with you and little C-Nut for you to get off your high horse and retract this entire post. It's a hell of a game. And you don't have to use the silly steering wheel, you can go "old school" and use a regular game controller with joysticks.

the only game worth a damn is madden football (or NHL 94).

I have less than 10 cds from my youth. My cassettes are MIA: Ratt, Bon Jovi, Europe, White Lion, Twisted Sister, Pink Floyd, and Wilson Phillips. Has anyone seen them?

I am indeed *advanced*. When I was 10 my brother was declaiming me an *80 year old grump*!

The Wii is a waste of time because, well, once you have *time* expropriated by family life....all these things appear inane.

And yes, given a choice, I prefer games with joysticks.

I thought for sure you were going to tout *Combat* or *River Raid*.

It's always telling - the posts which provoke a *reaction*!

Facebook is fun if you use it to keep up with old friends instead of actually hanging out with them. I agree with all of that crap with the wii, but when I get old with nothing to do I may pick up the wii for a wee bit of entertainment.

P-Pod...My buddy lives up in colebrook, NH and rarely ventures south of Plymouth, NH (as anyone south of plymouth is a flat lander) and rarely sees technological advances like cell phones and I-pods. He was drunk and apparently I didn't have enough ACDC or Tobey Keith for his liking so he offhandily told me to stick my p-pod where the sun don't shine. I told him he had 5 minutes to finish his warm Busch light before heading into the strip joint to see his sister and mother put on their act. We were visiting Providence and heading to the famous Foxy Lady for a bachelor party.
Kfell

So it wasn't a deliberate mispronunciation!

You made me hit Google Maps for those villages.

I've only been north of Plymouth, heck actually Nashua, for *vacation*....but never been near Colebrook. So me and your buddy are kind of polar opposites.

Never been there. Only been to *dance* joints in Baltimore (once)and Philadelphia (more than once).

So what if you dont't play wii? Are you a retard? Abnormal? Who gives the fuck?

Why do you like to show your man boobs? Are you gay?

The properly phrased expression is actually:

Who gives A f*ck?

How about you lay off the game console and brush up on your phonics?