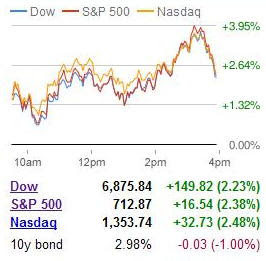 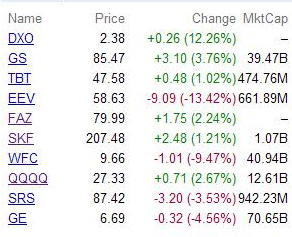 Wacky, because General Electric was dumping amid all sorts of nasty rumors/facts - in fact it traded as low as 5.87 this morning before bouncing a bit. Also, JP Morgan and Wells Fargo each got hit pretty bad (threat of debt downgrades or other such nonsense). So with those biggies, those bellwethers taking a beating....

Today I bought my new friend, the FAZ - the triple short financials ETF - at 70.62 on the opening bell.

Have I ever seen a better trading vehicle than FAZ these past two weeks?

Nope. Not even close.

Guys (and gals) must be making a killing just throwing out simultaneous buys and sells to scalp. The thing moves like it's depraved. Just look at the past three intraday charts:

That graphic doesn't do full justice to the point I am trying to make but it gives you an idea anyway. One really needs to watch that ticker flicker for full comprehension.

I also tried to scoop more SRS on the open but missed it. It rallied a full 8 points in the next 45 minutes!

GE on the other hand, that POS was easy to buy. I doubled up my position at 6.41.

I sold into this NASDAQ strength - shorting the QQQQ at 27.12 and 27.47 in equal parts. I don't really like this position and am tempted to cover it early tomorrow.

I bought a little more EEV - the double short emerging markets ETF. My price was 59.60.

The only reason I shorted that is this guy - Centrifugal.

He's a really sharp, and experienced trader I found recently. But he was dead-@ss wrong today. Everything he did was horrible. Finally, at the end of the day, when I saw him post this on his Twitter feed:

Look where he bought it: 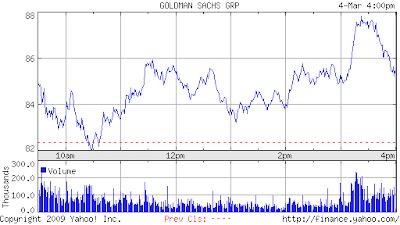 GS dropped down faster than a Jersey girl on Prom night.

Alright, it wasn't that bad. I just wanted to use that line that's been burning a hole in my chock-full head.

Centrifugal hit the confessional this afternoon - Mia Culprit. As bad as his trading was today, he said he's still up for the week. Go through his disastrous trades today and you'll see how impressive his *net* is. Seriously.

His style is different than mine - to put it mildly. He's more of a momentum guy - more of a traditional daytrader. I always wanted to become that type of trader but it just never suited my disposition or my talents.

Why spend 150k on college to become a certified *clerk* in a wage slave economy when one could sit home all day, learn for free from a veteran (20 years?) trader over the Web?

Y'all will have to learn from him because there's no way I'm going to live-stream my trades.
Posted by CaptiousNut at 8:48 PM

I told you those triple levered horses were good for day flogging.

(CD here...) Always happy to help any way I can. turns out all i really needed was a shower ;)

If only I could figure out how to successfully take the other side of my trades!

I owe you a premium beer.