Just as the Boston Globe is going bankrupt, its content has become so much more interesting: 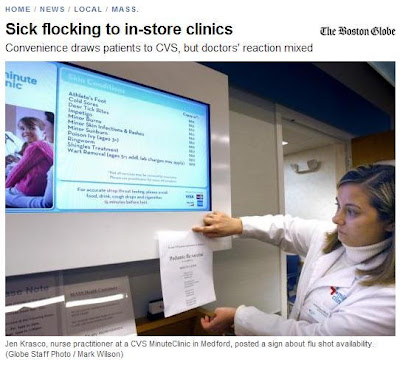 Dr. Poul M. LaPlante, a family practitioner near the Medford clinic, said three of his patients have gone to MinuteClinic recently for sinusitis, though his office had appointments available. They were given antibiotics, which he did not think was warranted; sinus infections are usually treated with steroid nasal sprays, he said.

"I was a little distressed by that," LaPlante said. "They don't have any ongoing relationship with the nurse practitioner. When they see me, I can usually call on their trust in me when I say they don't need antibiotics."

LaPlante said he has not asked the patients why they went to MinuteClinic. "It's a touchy subject with me. I feel sort of jilted and I don't want to convey this to the patients," he said. "But if someone is going on a repeated basis I need to ask them what is going on."

Dr. Andrew Escoll, a family practitioner in Tewksbury, said 10 of his patients have used the nearby MinuteClinic. He said that the clinic quickly sent him treatment notes, but that he also has seen overuse of antibiotics, a concern because it can lead to treatment-resistant bacteria.

Overall, he said, "they are actually doing a good job for what they're doing," Escoll said, but he remains philosophically opposed to the idea, in part because of the missed opportunity to discuss health screenings with patients. "People are always running to their doctor with colds. When they do, I can usually address a whole list of other things, like when they need a pap smear or colonoscopy," he said.

Did y'all catch that last insinuation?

A representative of Big Medicine's doctor cartel throws a subtle doozie out there - these walk-in clinics will increase cancer!

So, am I *for* walk-in Big Pharma medical clinics?

Yeah. I say clear the hypochondriacs out of my doctors' offices if it may reduce my costs and my wait-times. Though I won't hold my breath.

The Globe's articles now all have relatively open comment sections which are proving quite feisty. So far they haven't *censored* me, though I am yet to really *test* them.
Posted by CaptiousNut at 10:04 AM

Nobody likes competition. But they should.

Our society has a whole lot of competition where it's not needed or even frivoloous (e.g. college football).

And very little today where it could do the most good: education, media, medicine, etc.