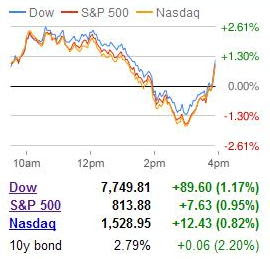 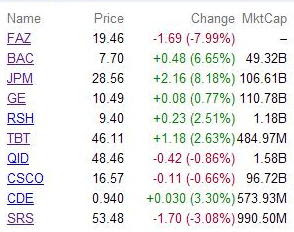 Today was a tease. The market soared in the morning. I saw the Dow up 170 pts or so.

Because there are still too many shorts - I guess. I think long term investors haven't even been a factor in the past two weeks. I bet it's simply been a traders' affair where savvy longs, like Michael Davey, have been taking money from formerly-flush and weak-handed shorts.

After the perky open, the market sold off for most of the day but culminated with a painful bank rally in the last hour.

It suffices to say that I'm pretty darn short at the moment.

The ostensible cause of the intraday sell-off was a weak Treasury auction, perhaps combined with a simlilarly weak government debt auction in Great Britain.

I think that's the case anyway. I don't follow that nonsense too closely - though I must admit, this *geo-political* news had me thinking today could be a really big down day. There's going to be a whole lot of scrutiny (and hope!) on these auctions going forward.

There's no *bailing out* a Treasury bond crash.
Posted by CaptiousNut at 8:06 PM

word on the street from my little network of hedge fund guys is that the downward/sell side pressure is off and people are waiting. expectations are for many companies to report "better than expected" results next quarter, and the headlines will be positive, and whether warranted by fundamental value or not, equities will run up pretty big. you might be right that we're lower in 12 months, but there's more traders waiting for the intermittent buy signals.

just some thoughts for ya.

You make valid points. On the other hand though there is a plethora a big accounts waiting to reshort. 10-15% is the maximum upside potential before the fall likely resumes. Smart money pierces through quarter over quarter comps (they will probably come in "better than expected") and eyes the forecast, which no trader is certain how it will be twisted and interpreted.

Right now the markets need to consolidate near the last bear market lows for a bit.

Quarter end window dressing is likely a factor in seeing these sharp low-volume V bounces. Also, the uptick decision is on April 2nd.

The macro business climate is horrendous, the only way for companies to forecast rosy projections is if they base them on a continuing weakening greenback and a rise in global demand.

There is also the bond market sell-off which could morph to a stampede. All the cash raised from pawning treasuries to the fed need to go somewhere as well.

I've been through this many times. I know that after ridiculous moves come ridiculous headlines.

And I fully expect the banks to lie big time on their next *earnings* reports.

I try not to worry too much about what others are doing. I just simply try to assess risk/reward bets and act accordingly.

There ain't enough time for financial gossip; and there's no way to *prove* it after the fact. Nobody truly knows why the market has bounced so much; AND nobody will EVER know why.

All we have is *marketable* explanations.

Direxion is offering a new wrinkle in their etf lineup...