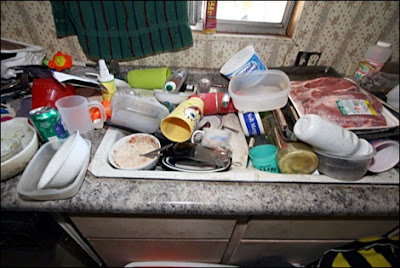 It's got to be the third worst household chore - doing the dishes.

I don't care what anyone says, dishwashers only help a little. They're good for glasses, silverware, and for, well, just clearing some counter and sink space for the dirty pots, pans, etc.

I have a highly sophisticated *system* of cleaning up the kitchen. The only problem is, often times my wife will come in and mess things up.

For example, she's a stuffer. She jams everything in the sink regardless of its *dirt*. She'll take all sorts of barely dirty dishes and plop them into a huge greasy pan filled with soapy water. So now instead of simply quick-wiping say a pan that just had boiled water in it, now it's covered all over in greasy residue. THIS DRIVES ME INSANE - and has for almost 10 years.

She'll also put stuff in the dishwasher without scraping it clean - like an egg plate. Her pitiful rationale is *I'm not going to wash stuff before putting it in the dishwasher*. No, instead, I have to wash it AGAIN after the cycle!

The last chafing offense that I'll mention of my wonderful wife is that she chooses dishes from the cupboard that increase my workload. For instance, she'll let the kids use funky Winnie-the-Pooh cups that have like 7 components to them, lids, straws, etc. Me, I give them paper cups. Or I re-use what they drank out of for the prior meal - on account of the *environment*!

But washing dishes sucks even without an aggravator. Everything is greasy and sticky; everything has cheese melted on it. I can't stand Tupperware and GladWare. That plastic crap doesn't wash - especially if someone nukes oily food in it. And it doesn't dry off - the lid and the grooves always trap water.

When I was in Florida this January, with the kids, by myself, in an unfamiliar kitchen, I took my dishwashing system up a notch. There was no way I was going to be able to operate efficiently with that little condo's tiny sink, no disposal, meager counter space, etc. Nor did I want to. I had my hands full with the kids and was also trying to relax a bit.

So I went the *all paper* route. Paper cups and those flimsy white paper plates for everything. (We also ate out ALOT.)

When I got home, I was hooked. Now we buy those plates 1,000 at a clip at CostCo - and we go through them. I'm doing fewer dishes these days....and my wife has few opportunities to frustrate my system!

Note that grilling also helps a lot in the summer - in the way of fewer dishes to wash. When's the summer going to start here in New England anyway? It's July 10th and we can still barely get a 70 degree day! 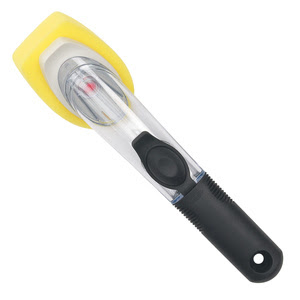 I just don't know how anyone can't efficiently operate without one of those soap-filled brushes.

And I don't know why anyone would ever get a *divided* sink and/or fill it all the way up with water. The big farmer's sink is definitely the only way to go.

Posted by CaptiousNut at 1:29 PM

Wifey and I have this EXACT debate. I offered to do the dishes if she does not jam them in the sink (or at least leaves one sink open for me to rinse them off). If she doesn't do it that way, then she gets to do the dishes...

Mrs. C-Nut has an uncanny knack.

Just now I discovered that she took the one large bowl I used today which was teeming with bacon fat, eggs, and tons of vegetable oil....she moved it INTO the sink, filled it with water, AND our dinner dishes!

Brilliant post. I can't tell you how many know-it-alls come over for dinner, offer to "do" the dishes, and then just throw everything straight into the dishwasher. Should I happen to reprimand them, they give me the same justification your wife uses and look at me like I'm a neanderthal.

Then you pull the stuff out a couple of hours later and the dishes are still completely covered with caked on food.

I'm going to throw this article at them the next time someone tries this lazy approach.