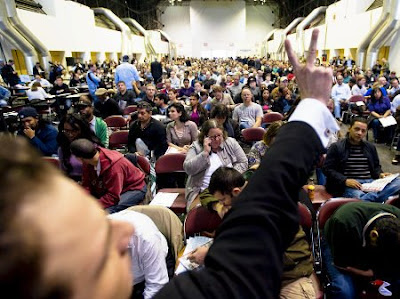 I spoke with my real estate buddy down in Naples briefly the other day.

Apparently he's got 8 clients with *full offer* bids in on properties (foreclosed?) at the moment. And, get this, he says that he doubts even one of his clients' bids will be accepted because they aren't *high enough*.

Now, I don't care what's happening at the end of this *green shoots*, deranged-optimism rally down in one particular part of the country....This economy is heading to hell in a handbasket.

First of all, let's discuss what's transpired in the past 3 months.

INSANE, bankrupt banks were tripping over each other to offer fixed 30 year mortgage rates at levels never before seen. A friend of mine acquired one such loan on his house in Orlando - a brand new home, I assume he put 20% down,....he received a 4.5% fixed 30 year loan. Unbelievable.

Also, these bankrupt banks like Bank of America, Wells Fargo, and JP Morgan were offering refi's at levels below 4%!!! How brainless is that? They are taking assets off each other's books that are paying 6% and transforming them into ones that pay a whole lot less. And for what exactly?

Oh, so they can book fees today and burnish their current earnings? Real smart, Morons.

This all happened in the context of not only the *spring buying season* but also amidst a furious, all-aboard bear market stock rally. The S&P rallied some 45% off its early March lows based upon, well, nothing fundamental whatsoever.

So idiots down in Florida, mostly *speculators*, are going bonkers trying to knife-catch an endless stream of foreclosures, big freakin' deal. This is no cause for longer term optimism. Haven't we been in this same exact myopic place some 4-5 years ago?

I mean, rates can only rise from here. Stocks have PEs twice as high (20X earnings) as seen by most bear markets. State and local governments are on the cusp of bankruptcy. Commercial real estate is bidless, in total over-supply, and trading 50% lower than two years ago. And residential real estate, in the most high-priced, blue-chip neighborhoods like NYC, Boston, and Silicon Valley has just started to drop.

To think that the long run prices of condos in Florida, a state whose entire economy has always depended on *real estate*, won't be aggravated by the above catalog is short-sighted and Moronic. 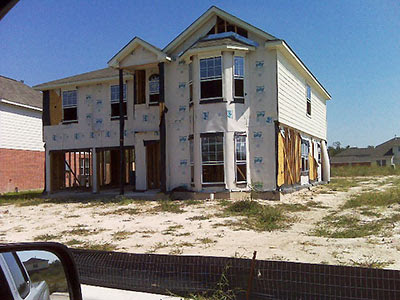 Now, recently I received this *prospectus* from another friend, who's also in real estate. It's selling:

....170 contiguous developed & platted lots, 100% complete (performance bond put up for final coat of asphalt) recently acquired by the sponsor of this deal as part of a larger discounted bulk purchase of the unsold portions (including raw paper lots) of ****** ******* an operational 18 hole golf and country club gated master planned residential community in Fort Meyers FL. The in place facilities are magnificent and 1,300 new homes out of the original 2,700 home subdivision sold for as high as $1,000,000. The new homes currently being sold start at under $200,000 by national builder, ***** ******, which means lot values to builders are in $40,000 range. The gross pro forma sell out to builders over a conservative time period of 30 months is $7,000,000 for the 170 lots which the sponsor is putting into the partnership at $3,000,000 ($17,600/lot). There are $1.4 of primarily soft cost to run the sales and marketing so the gross profit would be about $2.6mm.

The $1.4mm in sales costs can be capitalized into a $4.4mm project cost or the initial capital can be the purchase cost of $3mm and the other cost taken out of unit sales. The sponsor is open as to capital structure and structuring the returns but suggests a mid teen pref to the investors money and then a 50% split. The investor return should be over 20% IRR on the $3mm capital investment and less with the fully capitalized $4.4mm (which dollar amount is a projected 58% of retail value so could be looked at as a high yield loan with a kicker)

The sponsor has not shown any lot value price growth as might materialize if the market has bottomed out. We are in the process of bringing in one or two other builders for the 170 lots.

Some of y'all unfluent in these matters may have to re-read that for comprehension - I certainly did.

Basically someone is firesale-ing a couple of hundred lots in an existing community in Fort Meyers. This is hardly a rare event down there today.

But notices like these should be the fair warning to all these *speculators* bidding up foreclosures that the supply of homes in Florida, both today and tomorrow, will be continue to be immense.

And that while some of them may catch a *near bottom* in one particular little condo....their money is still going into a dead asset class for the foreseeable future.
Posted by CaptiousNut at 9:21 PM

I wouldn't mind a house on a golf course on the gulf coast of FL. IMHO-the only part of FL I would want to live. But it isn't happening.

Uncle Obama to the rescue!