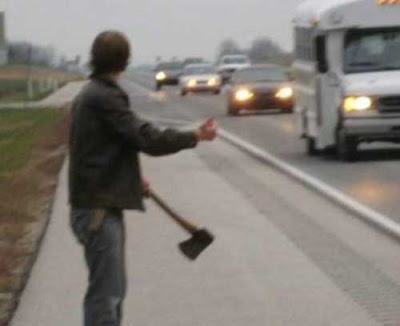 The other day I drove by a hitchhiker and slowed down. Not because I was even going to think about picking him up, but because I wanted to see how crazy he looked; I wanted to assess his chances of EVER getting a ride.

Thumbing, as they used to call it, has been *out* for quite some time now. I remember in the early 1980s learning (from my parents?) that it's dangerous to pick anyone up. Though one day, my father pulled over to pick some teenager up out in the sticks. I was watching the kid like a hawk in the rear-view mirror - lest he try any *foul play*. Turns out, he was a shifty Eagle scout! He had left his camp and was going to trek 5 full miles to the center of town for a pizza.

My mother told me that, as a teenager/college student (beyond?), she used to thumb rides all the time - and everywhere. That's hard to believe in this day and age.

So I ask y'all - what has changed so much? Why has hitchhiking disappeared from our culture?

A large part of the explanation has to be the relative cheapness of auto transport today, right?

Families used to only own a single car; now they often have 3-4 cars spilling out of their driveways (because the garage is cluttered!).

But I suspect there's also an anti-social aspect to hitchhiking's demise. People are scared to death of *everyone else*. This had to come from somewhere which I strongly suspect is Big Media and Hollywood. There's no way I could KNOW if people were friendlier 30, 40, or 50 years ago as I wasn't there. But I'm very much inclined to think so.

Anyways, one would think that ride bumming could make a comeback as it's *greener* than a dozen Priuses. It's a whole lot more *carbon neutralizing* than symbolic windmills, under-utilized commuter trains, or recycling paper. Heck, just about every car that drives has only one person in it. I believe hitching is popular in Europe - but am not sure. I've only been there once and didn't pay any attention. Cars and *petrol* are a whole lot more expensive across the pond....AND, those snooty Euros have a whole lot less money than we do!

That Luxembourg chick above, with her home-sewn jeans, looks perfect for our own West Coast Tom. He'd stop his Prius in a second for her....
Posted by CaptiousNut at 9:42 PM

Guess who gets called on to protect us from everyone else?

I wonder if they had anything to do with this...

It could just be the *declined* cost of transport here.

But the *fear* of hitchhikers has to viewed, minimally, in the context of squeamish parents today who are afraid to let their kids play IN THEIR OWN BACKYARD without supervision, bike helmets, etc.

I get your point though. If some device (say, perhaps Big Media) can scare the bejesus out of everyone about everything....then the masses will be puddy in the hands of the powers-at-be.

She looks very *organic*, no?

With that hair and whatnot....

Was looking for pic of hitchikers with guitars, no reason really. Came across this post. Short: hitchiking is very much alive. Ive gone across canada, into the states, it being my sole mode of transportation to get from city to city (bus and bike in city) for the past few years. Anyway, people arnt afraid to pick up hikers and there are tons who arnt afraid to hike. Media makes you think the opposite. But there are a lot of folks that do not pay much attention to the media. And so it should be! So join the gang. While your at it join chouch-surfing and the freegans!

Never heard of couch-surfing before. Thanks.

I've actually slept quite a bit on my own couch...

"I believe hitching is popular in Europe - but am not sure. I've only been there once and didn't pay any attention."