Better yet, fiat is Latin for "let it be done".

Today I want to highlight two outstanding developments in the world of irredeemable, paper currency.

First, from that bastion of liberty - China:

(CNN) -- As Internet-based economies edge closer to their real-world counterparts, one country is apparently trying to build a wall between the two.

China has announced new rules that prevent "virtual currencies" like Linden Dollars and QQ coins from being traded for real cash.

"It's a pretty important step," said Edward Castronova, a professor at the University of Indiana who studies virtual currency. "These virtual currencies, as they grow, are going to become competitors to real-world currencies -- and apparently that's what happening in China. These QQ coins are becoming things you can use at the corner store to top off your bill."

It's difficult to say how large virtual economies have become, because governments don't conduct surveys, Castronova said, but the popularity of online cash is reportedly growing by as much as 20 percent per year.

Virtual worlds like Second Life allow users to buy clothes, cars and land for their virtual characters, or avatars. And online cash has become important in online games and social networks, where users can buy trinkets to give to their friends or power-ups for their video game characters.

Hah! No government, no matter how inept, is going to tolerate a competing form of money. If they did, it might become difficult for them to interfere with the lives of freely associating peasants! Our elected officials will do EXACTLY the same - so don't y'all laugh.

And secondly, the insane IOUs being issued today by the State of California: 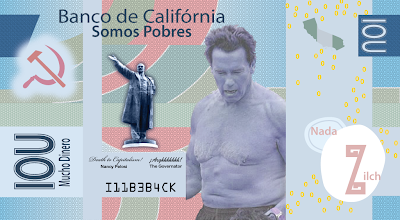 There're all sorts of issues with this *new currency*....which banks will accept them? Are they tradable? Are they *securities* subject to regulation? Etc.

It's such a complete disaster that I wouldn't be surprised if it precipitated a stock market crash. I do wonder which state will be next. Michigan? New Jersey? Every single one of them is technically bankrupt.

As I hinted at in a previous post's comments....we do have *other* options than fiat servitude.

Did y'all know it was legal in the States to issue your own paper currency? Click here.

Is that a good idea? Perhaps for a little while. Remember still that fiat, paper currencies have a historical failure rate of 100% - no matter how well originally designed or *reserved*.

Our next choice is good old-fashioned barter. One just can't find an apocalyptic perma-bear these days whose every fourth word isn't *barter society*!

Have to run now. I cut the lawn, did the laundry, and cleaned the kitchen. Think that's currency enough for my wife let me go boozing?
Posted by CaptiousNut at 7:54 PM