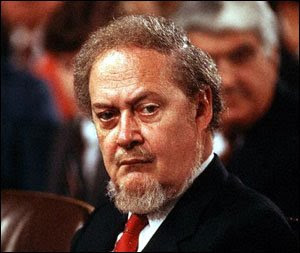 Newsweek - On another front, the court has decided three cases against the Bush administration on Guantanamo, the most recent one giving habeas corpus rights to supposed enemy combatants. What do you make of that whole line of cases?

Robert Bork - It strikes me as preposterous to begin to extend rights to enemy combatants that we never extended to captured Germans, Italians and Japanese in World War II. It's also dangerous once we begin to judicialize the conduct of a war. It can only make our forces less effective. But something has changed in the attitude. I think it was the invasion of Grenada, when a commanding officer refused to let the press come to the front lines, and a reporter said "in World War II we were allowed in the front lines," and the commander said "in World War II you were on our side."

By the way, I don't know anything about Robert Bork, one of Ronald Regan's Supreme Court nominees who was shot down by Congress.

At the time I was 13 and thoroughly uninterested in contemporary politics - as I am again now. So if you are a ruling or aspiring slimy politician or some other celebrity today....you have missed your window of opportunity to frustrate my chi!

He seems like a pretty sharp guy though. Read that whole interview here.
Posted by CaptiousNut at 7:29 AM