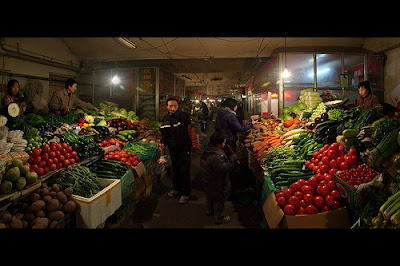 I really don't want to be *that guy*, you know, the one who mocked golf his entire life as a sissy non-sport but then retired and was smitten by the golf bug - forever lamenting that they should have taken the game up years ago, back when they were *more flexible*.

I'm trying to be real conscious these days of personal closed-mindedness. Remember although I didn't ridicule yoga before, I let preconceived notions about it, and my impressions as to whom it was *for*, I let them build up a wall of resistance to the practice in my mind. Thankfully, I was able to break through.

In this spirit, I recently realized that I hadn't fully researched a number of things. A couple of weeks ago, in conversing with that Canadian *mom* I met, I came face-to-face with one of these very issues.

She was talking about being a vegetarian - something I've mocked for years. I asked the young lady why she won't eat meat:

CanadianVeggieMom - I stopped eating meat when I was 16. I had a bunch of friends who were vegetarian so I tried the diet unintentionally....My body felt so much better it was unbelievable. So I stuck with it.

Nowadays she also has a *global warming* justification for eschewing meat - she said that one could have their veggies overnighted, everyday from Australia and their diet would still have been supplied by less fossil fuel than what's burned by meateaters. She told me to go Google it.

That last part sounded dubious to me, but again, I freely admit that I haven't at all looked into how my fleshy foodstuffs are made. The Bible says its okay to barbeque critters, right?

And let's not even get into the false premise that burning carbon is going to kill us.

While I sat there listening to VeggieMom, I kept my mouth closed and my mind open. Then when I got home I relayed my thoughts on the possibility of vegetables perhaps being healthier to my wife:

Mrs. C-Nut - That part about *feeling better* is total bullsh*t....I've tried those fruit, vegetable, and bean diets for weeks at a time....not eating meat DID NOT make me feel healthier....I was starving and felt terrible!

So there you have it!

Just after I mustered the intellectual humility to admit that I had never tried meatlessness, and was about to give it a go,....

My wife came in and, as she's wont to do, slammed shut my wide-opened mind!

But, is there a way we can test the *veggies are healthier* proposition by proxy?

Sure. How about looking at the *free market* of professional athletes?

I Googled *vegetarian pro athletes* and found relatively nothing. Desmond Howard and a couple of no-names.

One might think if carrots, rice, and pomegranates were in fact better for the bod....that there'd be some empirical evidence in the way of vegetarian athletic out-performance, right? And one would think that *competitive* athletes would be going vegan in droves, right?

Alas, there aren't any that I can find.

But I did find this hilarious story of Prince Fielder - a baseballer who gave up meat and lost all of his hitting power!!!

For background on VeggieMom, see - Homeschoolers - Winning The Diversity Bee Too!.

Those Militant Vegans Had It Coming

America - Where Beggars Can Be Choosers
Posted by CaptiousNut at 1:02 PM

While far from a vegetarian I will say that a diet heavy in fruits, veggies, and beans, makes you feel better. More energy, less weight, etc. The anti-oxidants certainly help your body fight off age related deterioration if nothing else. Skin is better, hair is better, teeth are better. There are some very healthy native diets in the world that don't involve vegetables and fruits much, but they are few and far between. While not so much for the "green" reasons, I would thing someone as curious as you would research more on our foods. How they are grown, modified, and marketed.

With two small kids whose parenting is 100% insourced....

I barely have time to *evacuate* my intake - never mind perform an exhaustive socio-chemical analysis on how it came to be!

By the way, I should have posted a *turbulent exit* warning on my wings recipe!

All this bible talk....have you been diagnosed with cancer? 'Cause it sounds like whistling past the graveyard to me.

As for flying in vegetables from Australia, I would think that could only be cheaper than equivalent animal husbandry carbon footprints if the plane was packed full of vegetables. The bigger problem with a meat-based diet has to do with fats and fillers which conveniently convert into arterial plaque. The various chemicals used on the animal farm are not exactly beneficial to the last animal in the food chain either.